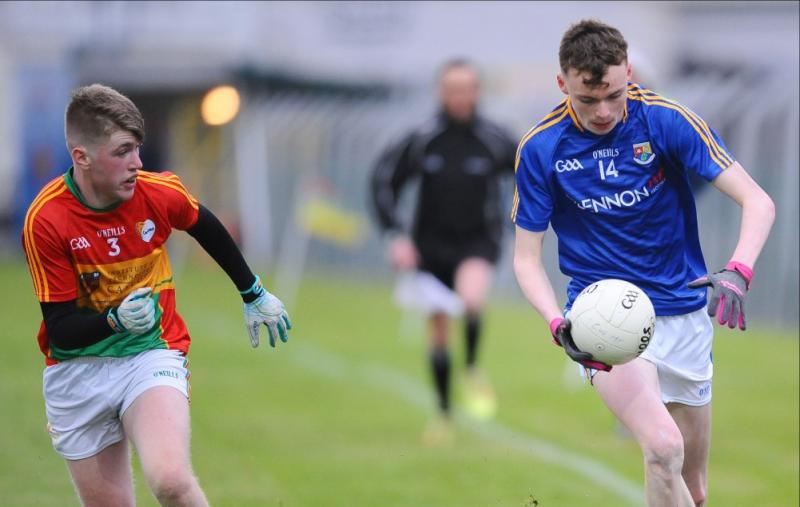 Jack Duggan (Clonguish) pictured in action for the Longford U-17s against Carlow. Congratulations to Jack for being voted Electric Ireland Minor Football Player of the Week. Pic: D Gilmore

While the Longford footballers prepare for a crack at Kildare in the Leinster SFC quarter-final at O’Connor Park, Tullamore on Sunday 26 May (4pm), the focus this weekend is fixed on the county minors and senior hurlers.

It is make or break time for both teams in the aftermath of different results during the past few days with the hurlers hoping to bounce back from a narrow defeat (1-15 to 1-12) against Warwickshire in the opening round of the Nicky Rackard Cup.

Missed chances and mistakes cost Longford dearly at Glennon Brothers Pearse Park on Sunday last and manager Derek Frehill has to lift the players for a must win match away to Monaghan this Saturday (3pm).

The Inniskeen grounds is the venue for Round 2 clash in the fourth tier championship with Monaghan also under pressure after losing to Armagh (2-20 to 2-14) last weekend, conceding the crucial goals in the final quarter of the contest at the Athletic Grounds.

Longford are facing a tough task in their quest to keep alive their hopes of reaching the Nicky Rackard Cup semi-finals with their remaining group fixture at home to Armagh on Saturday 1 June.

The U-17 footballers are chasing a place in the knockout stages of the Leinster Minor Championship and got back on track with a hard earned two points win (1-8 to 0-9) over Carlow last week.

Full-forward Jack Duggan played a leading role in the positive performance at Netwatch Cullen Park, clocking up the impressive total of 1-5 as the county minors recovered from the disappointment of the defeat against Westmeath in the opening round.

Longford conclude their group campaign against Laois at Glennon Brothers Pearse Park this Saturday evening (7pm) and have to win in order to clinch a quarter-final clash against Meath on June 1.

Laois drew against Carlow and then battled back to beat Westmeath by a point (3-6 to 1-11) but Longford are capable of coming out on top if they play to their true potential.