Longford Senior League: Colmcille come out on top against Dromard 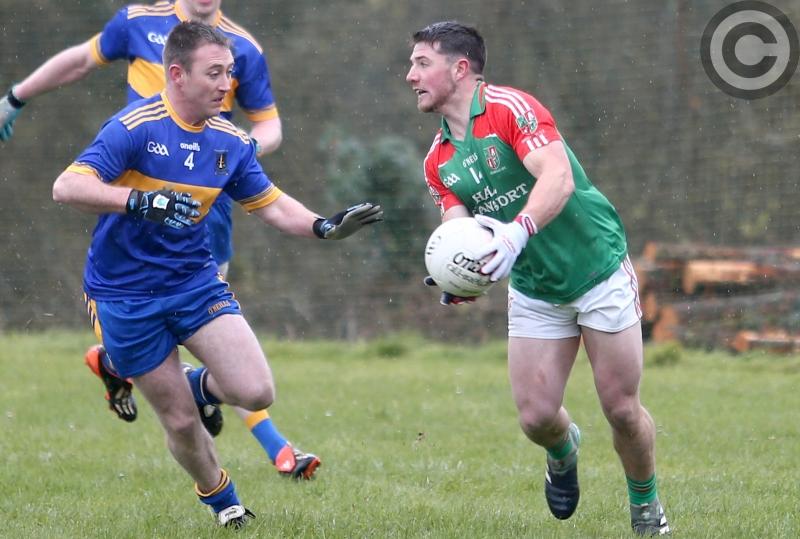 Cathal McCabe on the ball for Colmcille in his bid to evade the challenge of Dromard opponent David Pettit. Action from the Division 1 football league game on Sunday last. Picture: Syl Healy

Two first half goals from Cathal McCabe set Colmcille on their way to inflicting a first league defeat on neighbouring rivals Dromard in miserable conditions at McGee Park on Sunday last.

Barely 30 seconds had elapsed on the clock when McCabe got his first goal; Dromard keeper Sean McNerney tried to stop Dylan McCabe’s effort from going over the bar but the ball came back out to Cathal who made no mistake to find the back of the net.

McCabe got his second goal in the 13th minute and at that stage extended the Colmcille lead to six points but goal from Cian Mimnagh in the 19th minute got Dromard back into contention.

Colmcille got off to the perfect start when Cathal McCabe scored a goal. A free from Joe Hagan moments later was Dromard’s first score but Colmcille kicked over two points to put four between the sides by the ninth minute.

Ronan McEntire kicked over a terrific point for Dromard in the 12th minute but one minute later Colmcille got their second goal when Cathal McCabe latched on to a long ball and hit a low shot past opposing keeper Sean McNerney.

Paul McKeon added a point to extend Colmcille’s lead to seven in the 18th minute but Dromard were back in the game in the 19th minute when Cian Mimnagh’s effort somehow crossed the line despite Colmcille defenders trying to get back to clear.

Both sides had chances but were poor in front of the posts as Colmcille held a three point lead at half-time: 2-3 to 1-3.

Ruairi Harkin’s well struck ‘45 in the 36th minute was the first score of the second half. Cian Mimnagh was unlucky not to get a touch on a Francis McGee ‘45 in the 39th minute and then McGee was fouled with Mimnagh converting the free.

Ronan McEntire began causing problems for Dromard and Colmcille conceded two more frees which Cian Mimnagh pointed to cut the gap to just the minimum of margins in the 44th minute and the momentum was with Dromard.

Colmcille got an important point in the 47th minute when the excellent Alan McKeon set up Ciaran McKeon to shoot over the bar. Good play involving Diarmuid Masterson saw Ronan McEntire make it a one point game again in the 52nd minute.

A great move involving Cian Mimnagh and Ronan McEntire set up Francis McGee but his shot was brilliantly saved by Colmcille keeper Mark Kiernan in the 54th minute. With the game evenly poised both sides created chances but their finishing was poor.

Dromard became a little frustrated and conceded a free in the 59th minute which Ruairi Harkin pointed to put two between the sides and Colmcille were able to hold out for a hard earned victory.