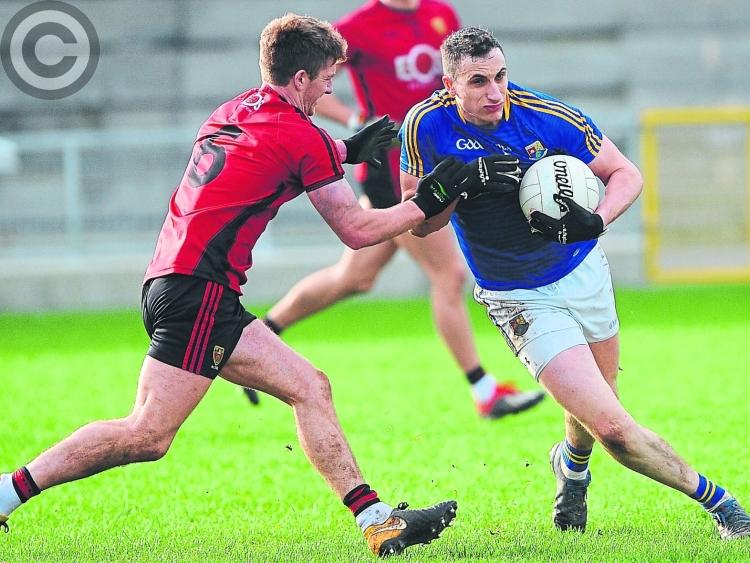 Longford midfielder Darren Gallagher pictured in action against Down in the National Football League Division 3 game at Glennon Brothers Pearse Park at the end of February. Photo: Declan Gilmore

Longford have suffered a major blow in their preparations for the Leinster Senior Football Championship quarter-final clash against Kildare or Wicklow on Sunday May 26 with the bad news that Darren Gallagher is gone from the squad.

Outstanding in the National League campaign this season and probably the main reason why Longford survived in Division 3, powerful midfielder Gallagher had made a decision some time ago to pursue a temporary stint in the United States and that move abroad is about to materialise.

Manager Padraic Davis is lamenting the loss of Gallagher who he described as one of the best midfielders in the country.

“Darren is an extraordinary player who was committed to us for the National League and what a brilliant season he enjoyed in playing a major role to consolidate the Division 3 status.

“Without doubt he is one of the best midfielders in the country and he will be sorely missed in the championship. A marvellous fellow who has given everything for the cause and we have to respect his wish to spend some time in America.”

In another setback for Davis and his selectors Paul Barden and Donal Ledwith, the absence of Rian Brady so far this year is set to continue as he is also heading to the United States with talk of Robbie Smyth and Dessie Reynolds going in the same direction.

Smyth featured in the early stages of the league this season before leaving the county squad with no sign of a return while the exam-tied Reynolds was ruled out of the entire Division 3 campaign.

Rathcline’s Shane Donohoe is away on Army duty in Syria after playing for Longford in the league but there is some good news for manager Davis as Padraig McCormack is fit again after a lengthy injury absence (Gilmore’s groin).

The inspirational Killoe defender, who was back in action for his club in the Division 1 league, has not lined-out for the county since the All-Ireland Qualifier Round 2 narrow defeat (1-16 to 1-13) against Kildare at Glennon Brothers Pearse Park at the end of June last year.

With the exception of Rian Brady, seven other Mullinalaghta players are back in the Longford squad with Donal McElligott, Patrick Fox, James McGivney and John Keegan returning for the latter stages of the league and are now joined by David McGivney, Jayson Matthews and Gary Rogers.

While captain McElligott might be ruled out of the Leinster Championship clash at the end of May after getting sent-off deep into stoppage time in the final league fixture against Westmeath, an appeal is pending in a bid to overturn the automatic one match suspension.

Padraic Davis was furious with that decision as the referee acted on the evidence of the linesman on the stand side of the pitch at Cusack Park.

“It was no way a dangerous tackle. Anyone who knows anything about football would agree with the general opinion that it was not a red card offence and hopefully Donal will be cleared to play in the championship.”

Down a total of 17 players in the earlier part of the National League, including the retired regulars Diarmuid Masterson, Sean McCormack and Barry Gilleran, the situation is gradually getting better as Longford build for the biggest game of the year in a few weeks time and Davis is optimistic.

“Conor Berry suffered a ligament tear to a knee when playing for Abbeylara  in the county final replay last October; his recovery has been a slow process but we expect him to be in the best possible shape for the championship.

“Survival was the target in the league and thankfully that aim was achieved by the lads who love playing for their county and have shown great commitment.

“With so many players missing a lot of newcomers got their chance to develop their potential in giving us some other options when it comes to picking the team.

“If we end up playing Kildare in the championship it is going to be a big ask against probably the second best team in Leinster alongside Meath.

“We will be hoping to build on the win over Meath in last year’s Leinster Championship and have a real cut at Kildare who will be very wary after suffering a shock defeat against Carlow last year.

“Longford ran Kildare very close in the qualifiers last year and we will certainly not fear them on the presumption that they will beat Wicklow in the first round,” stated the Longford manager in looking ahead to the Leinster Championship.