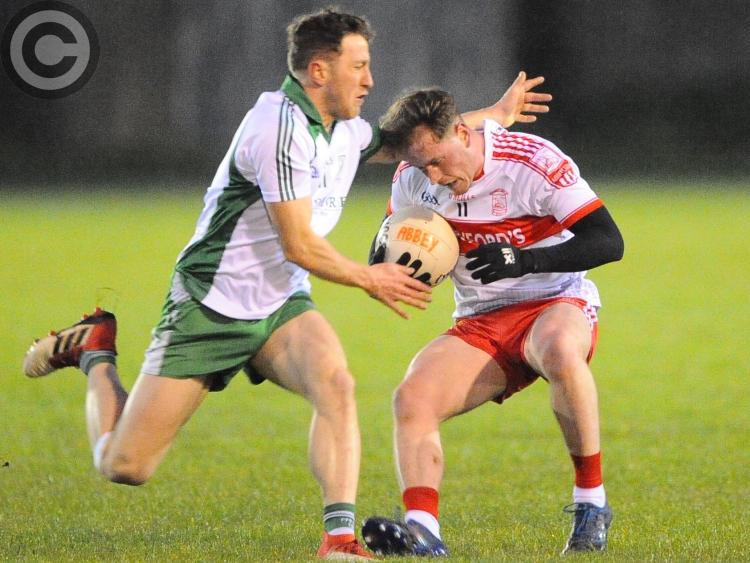 Cian Brady on the ball for Abbeylara in this tussle with Killoe opponent Daniel Mimnagh. Action from the Division 1 football league game at Emmet Park. Picture: Declan Gilmore

Killoe had four points to spare over Abbeylara at Emmet Park on Friday night last as they scored a second win in Division 1 of the All County Football League.

The damage was done in the first half with Killoe opening up an eight point lead by the 22nd minute with Daniel Mimnagh scoring the crucial only goal in the 14th minute.

Mimnagh was a real driving force for Killoe throughout the game along with Michael Quinn as Abbeylara struggled to deal with the threat of the two county players. Niall Farrelly, Shane Thompson and Shane McManus also played their part in the Emmet Og victory.

Abbeylara, with Mickey Harkin back in charge for a second stint, fought back but just couldn’t get close enough to make it difficult for Killoe The visitors trailed at the break by six points (1-7 to 0-4) and were fighting an uphill battle in the second half.

It was Daniel Mimnagh who opened the scoring with a fine point in the second minute. Sean McCormack curled over a neat free soon after while a  good point from Cian Brady in the eighth minute was Abbeylara’s first score.

Killoe then took control with Shane Thompson landing a point in the 12th minute and then Daniel Mimnagh cut through to shoot low to the net. Emmet Og, under the guidance of new manager Thomas Donohoe, were patient in their play and in the 18th minute Sean McCormack set up Michael Quinn for a good point.

Niall Farrelly then surged forward to fire over a point as Killoe extended their lead. After going 17 minutes without a score Nigel Rabbitte scored a point for Abbeylara in the 25th minute when he fired over a free and the same player landed a nice point from play moments later.

Killoe replied with a terrific point from a tight angle by Eamon Keogh before Rabbitte converted a free before the break.

Six minutes into the second half Killoe had restored their eight point advantage before Nigel Rabbitte replied with a great score for Abbeylara.  He added another one in the 42nd minute before substitute Barney Crawford pointed to close the gap to five.

Michael Quinn got a score  for Killoe in the 52nd minute and then Rabbitte converted a  couple of frees for Abbeylara who were now four points behind.

Substitute Cian Dooner scored a point for Killoe in the 59th minute with Abbeylara getting a consolation score in stoppage time as they crashed to a second consecutive defeat in the league this season.