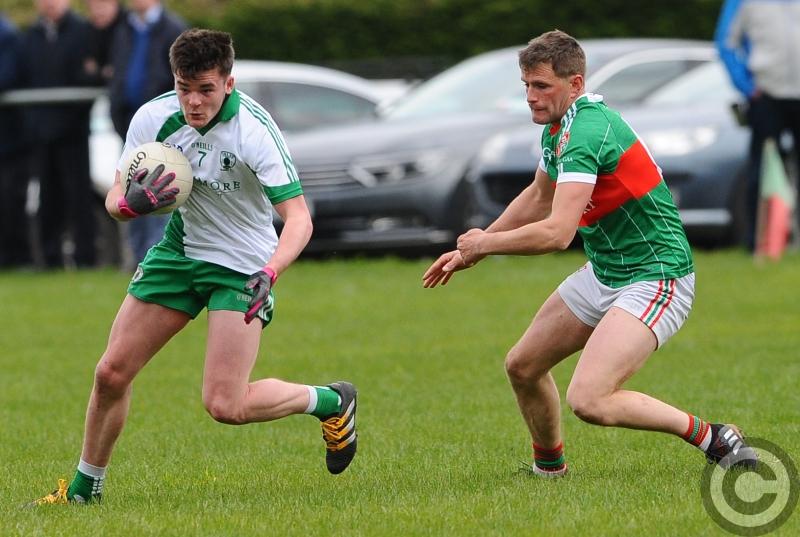 Denis McGoldrick scored 1-1 in the space of four minutes as Killoe snatched a dramatic win over Colmcille at McGee Park on Sunday last in the opening game of the Division 1 Football League.

Colmcille had been up by seven points during the second half and although Killoe had cut the gap to the minimum of margins, Fergal Sheridan’s goal in the 47th minute looked to have sealed the win for the home side.

Credit to Killoe they never gave up. The introduction of Padraig McCormack at half-time proved to be crucial and he played a pivotal role in this win. Colmcille had a chance to earn a draw at the end but Barry McKeon was unlucky to see his effort go wide.

It was tough on Eugene McCormack’s side who had looked comfortable for large periods. When Denis McGoldrick scored Killoe’s goal in the 59th minute it knocked Colmcille a little. Four minutes later he was set up by James Moran to tap over the decisive winning point.

Colmcille made a great start to the game when Cathal McCabe’s shot wasn’t held by the Killoe keeper Micheal Hughes and Ruairi Harkin pounced to find the back of the net inside the opening minute. Eugene Clarke kicked over Killoe’s opening score one minute later before Colmcille took control.

McCabe kicked over a neat point before Ciaran McKeon set up Paul McKeon to fire a shot to the net. A nice point from Rory Hawkins extended Colmcille’s lead to seven by the  ninth minute.

Daniel Mimnagh scored a much needed point for Killoe in the 10th minute with Sean McCormack and Denis McGoldrick both kicking over frees. The lead was seven again by the 19th minute after Colmcille kicked three points in a row.

Daniel Mimnagh then had a goalbound shot cleared on the line. As half-time approached Killoe began to come back into the game and cut the lead to three points with a wonderful point from Ronan McGoldrick.

Mark Hughes and Sean McCormack (free) brought Killoe to within one point of Colmcille in the early stages of the second half. Cathal McCabe was unlucky to see his effort go just wide in the 35th minute. Excellent points from Barry McKeon and Ciaran Brady and a Rory Hawkins free put four between the sides by the 42nd minute.

Killoe replied with two points but a goal from Fergal Sheridan and a free from Hawkins extended Colmcille’s lead to seven again by the 49th minute but that was to be their final score of the game.

A Daniel Mimnagh point and converted frees from Sean McCormack made it a three point game in the 57th minute and the momentum was now with Killoe. They drew level two minutes later when McCormack’s effort was blocked and Denis McGoldrick fired the loose ball to the net. Minutes later he fired over a dramatic late winner.