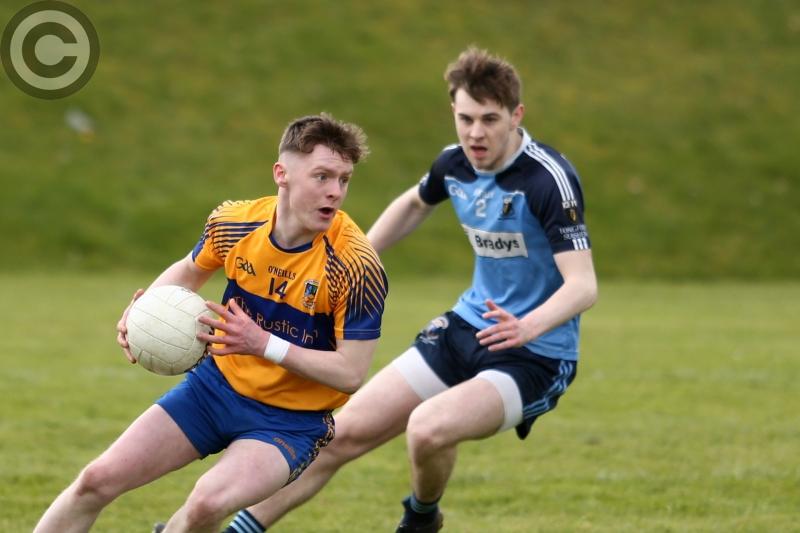 Aidan McGuire on the attack for Carrickedmond in breaking away from Slashers defender Liam Barry. Action from the Division 1 football league game at Michael Fay Park. Picture: Syl Healy

Carrickedmond got off to a great start in Division 1 of the All County Football League with a well deserved win over Longford Slashers at Michael Fay Park on Sunday last.

Playing with the advantage of the wind, Carrickedmond dominated the first half to hold a commanding 1-8 to 0-1 lead at the break.

Sharp attackers Aidan McGuire and Kyle Kenny were posing a lot of problems for the under pressure Slashers defence with Sean Kelly and John O’Shea giving the visitors a decisive edge at centrefield.

Full-forward McGuire set up Kenny for a well-taken goal in the 14th minute, at which stage Carrick had already five points on the scoreboard and Slashers solitary response came from a free converted by Robbie Clarke in the 4th minute.

The lively McGuire fired over the first two scores (free and play) for Maurice O’Connor’s side with Rioch Farrell, Jonathan Keegan and Sean Kelly also on target.

Carrickedmond extended their advantage with a further brace of scores from Aidan McGuire with Kelly getting a second point to leave Slashers struggling.

The home side wasted a few chances including a poor effort from Peter Foy who blasted the ball wide when a goal chance was on in the 23rd minute.

New Slashers manager Noel O’Brien from Kiltoom, Co Roscommon saw his team make a bright start to the second half with three points in quick succession to close the gap.

Barry Gilleran converted a ‘45’ in the 35th minute and a couple of scores followed from Peter Lynn to give Slashers a glimmer of hope.

Carrickedmond needed a score to settle things and it materialised in the 40th minute when Kyle Kenny burst his way through to shoot over the bar.

Two more points from Gilleran (free and play) left Slashers trailing by 1-9 to 0-6 midway through the second half.

But Carrickedmond struck the killer blow with a goal from a penalty converted by Aidan McGuire in the 52nd minute following a foul on Sean Kelly by the opposing keeper Colm Farrell.

In producing a poor overall performance, Slashers replied with a point from Cian Kavanagh and a late consolation goal from Robbie Clarke in the final minute of normal time

Carrickedmond, superior in most positions on the pitch, finished the game with 14 players when defender Niall O’Farrell was sent-off in the fourth minute of stoppage time after receiving a second yellow card.