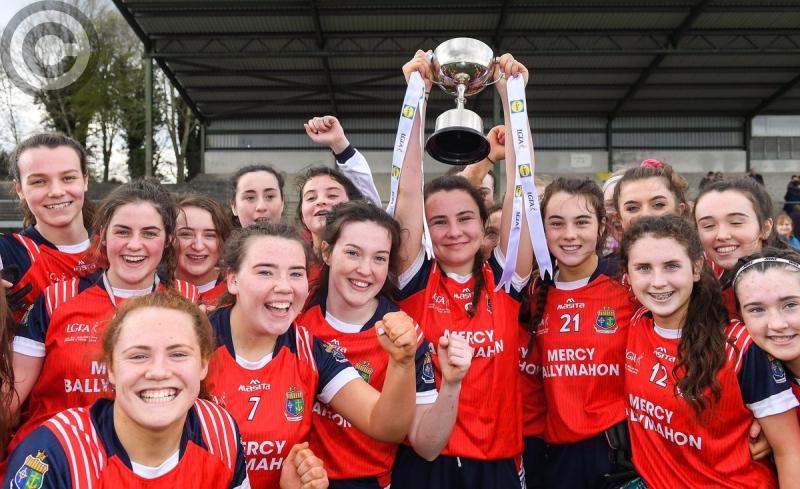 It was third time lucky for Mercy Ballymahon as they captured the Lidl All-Ireland Post-Primary Schools Senior ‘C’ title with an emphatic win over Cork opponents St. Mary’s High School, Midleton in the final at the Banagher GAA grounds, Co Offaly on Saturday.

Several members of the Ballymahon SS team suffered the bitter disappointment of losing the All-Ireland U-16 Final back in 2017 while they missed out on the Leinster Senior title last year. They were determined to make 2019 their year.

Mercy Ballymahon took the game to St Mary’s right from the start. Sarah Dillon registered the game’s first point in the third minute. She kicked over her second minutes later before Zoe Guinane gave the Ballymahon school a three point lead in the fifth minute.

It was Dillon who set up Clodagh Lohan in the sixth minute to score the game’s first goal. Three minutes later Dillon found the back of the net as her side raced into a nine point lead.

A free from Sarah Leahy was St Mary’s first score on the board. In the 15th minute Mary Leahy raced through to score a goal for the Midleton school. Rachel Leahy then kicked over another point to cut the deficit to four points in the 17th minute.

Clodagh Lohan scored her second and her side’s third goal in the 21st minute with a great finish to the net. Ciara Healy and Sarah Dillon added points to restore a nine point advantage for Ballymahon SS in the 26th minute.

Ali Smith kicked over a much needed point for St Mary’s in the 30th minute before Dillon landed another score for Ballymahon SS to leave them leading by 3-6 to 1-3 at the break.

St Mary’s fired over early points in the second half but once again Dillon showed her class kicking  two points with Ciara Healy adding another one to regain their commanding nine point lead. The Cork side needed goals but the Ballymahon SS defence stood firm and Midleton could only kick over two points.

In the 47th minute Dillon kicked over a wonderful score. Clodagh Dillon was sin binned for Mercy in the 50th minute but it mattered little. In the 53rd minute Clodagh Lohan wrapped up the game with a neat goal.

St Mary’s misery was compounded in the 56th minute when captain Sarah Leahy was sin binned. Sarah Dillon kicked over two further points while Ciara Healy scored an excellent point as the Ballymahon school sealed the All-Ireland success in style.