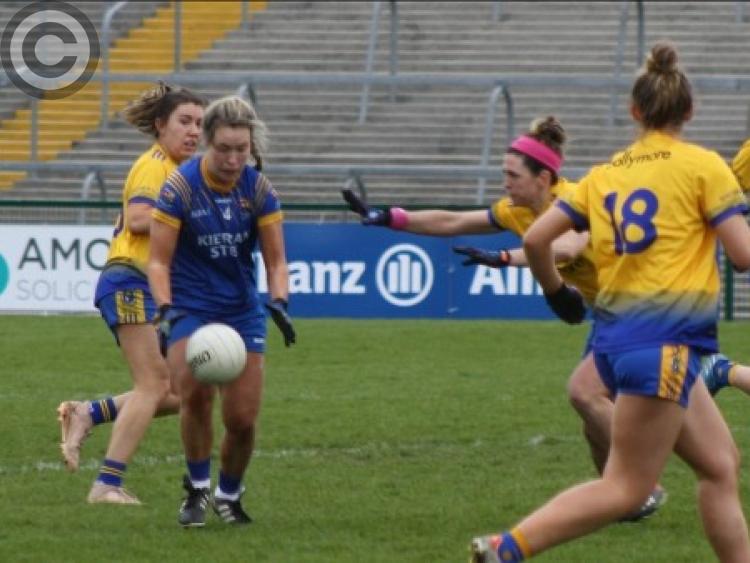 A superb display by Roscommon goalkeeper Helena Cummins helped her side defeat Longford in a tight and exciting league clash at Hyde Park on Sunday last.

This setback  has dented Longford’s hopes of making the Division 3 semi-finals. They will need to win at home to Wicklow in their final game on April 7 and hope that Kildare drop points; the Lilywhites have a game in hand which is at home to Offaly who are fighting against relegation.

Longford created plenty of scoring chances but like previous games they were made rue those missed opportunities. They also found it hard to find a way past the excellent Roscommon keeper Cummins.

It was Longford captain Emer Heaney who kicked over the first point of the game. Jenny Higgins replied for Roscommon. Cummins then made fine point blank saves to deny Longford.

Longford could only add four more points to their tally in the first half through Ciara Healy, Michelle Farrell and Aisling Greene (2). Roscommon grabbed two goals in the first half that were to prove crucial with Alice Kelly and Laura Fleming on target to leave the home side holding a five point lead at the break: 2-4 to 0-5.

Longford started the second half very well. Michelle Farrell kicked over three points with Aoife Darcy scoring one. Longford knew in order to get something out of the game they needed to score goals but Cummins thwarted them again on a number of occasions and the crossbar also denied Longford who were in very hard luck.

Roscommon were able to get a third goal which proved to be the difference and kicked over four more points. Longford finished the game with a goal from captain Emer Heaney and points from Aoife Darcy (2)  and Michelle Farrell.