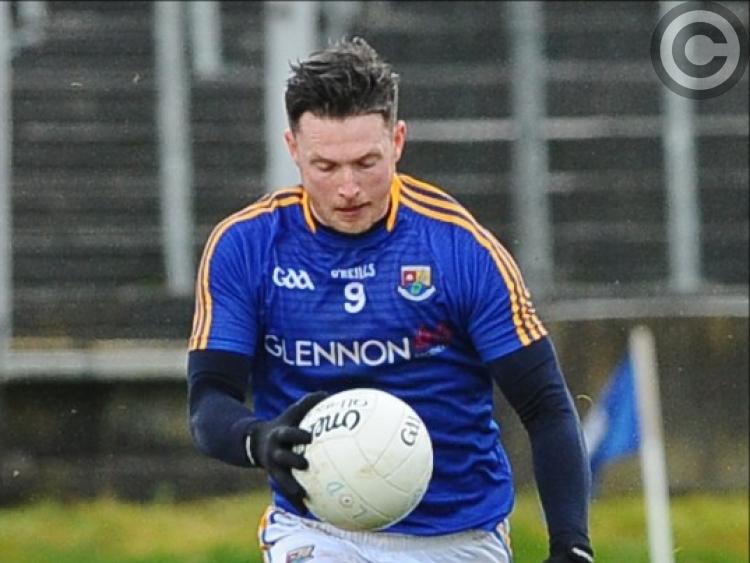 Michael Quinn, who scored the goal for Longford with six minutes gone in the second half of the league clash against Westmeath. Picture: Declan Gilmore

Longford ended their Division 3 league campaign with a disappointing defeat against Westmeath at TEG Cusack Park, Mullingar on Sunday.

Apart from a strong spell in the third quarter of the contest when they came from three points down to lead by 1-9 to 1-8 with midfielder Michael Quinn scoring a well-taken goal in the 41st minute, Longford never really looked like emerging victorious in the local derby.

This deserved win for Westmeath, who showed the greater urgency to come out on top, keeps them on course for promotion and a draw in the refixed Round 6 game against Louth in Drogheda on Sunday next will be good enough to clinch a place in Division 2 next season for Jack Cooney’s side.

Thanks to a fine goal from corner-forward Ronan O’Toole in the 8th minute, Westmeath surged into a 1-2 to 0-1 lead but Longford battled back to fire over four scores in quick succession through Darragh Doherty, Daniel Mimnagh (2) and Peter Lynn to level matters.

The home county regained the upper hand to hold a slender 1-6 to 0-7 advantage at the break after playing against the wind in the first half but Longford launched a comeback on the changeover to lead by 1-9 to 1-8 when goalkeeper Paddy Collum landed a very well struck free in the 48th minute.

Westmeath got back in control in adding a further six consecutive points to their tally, four from the impressive Ger Egan who clocked up the grand total of 0-9 (seven frees), with Ronan O’Toole and John Heslin also on target for the home side who ran out fairly comfortable winners in the finish.

Longford's tale of woe was complete when Donal McElligott was sent-off in the seventh minute of stoppage time after receiving a straight red card.