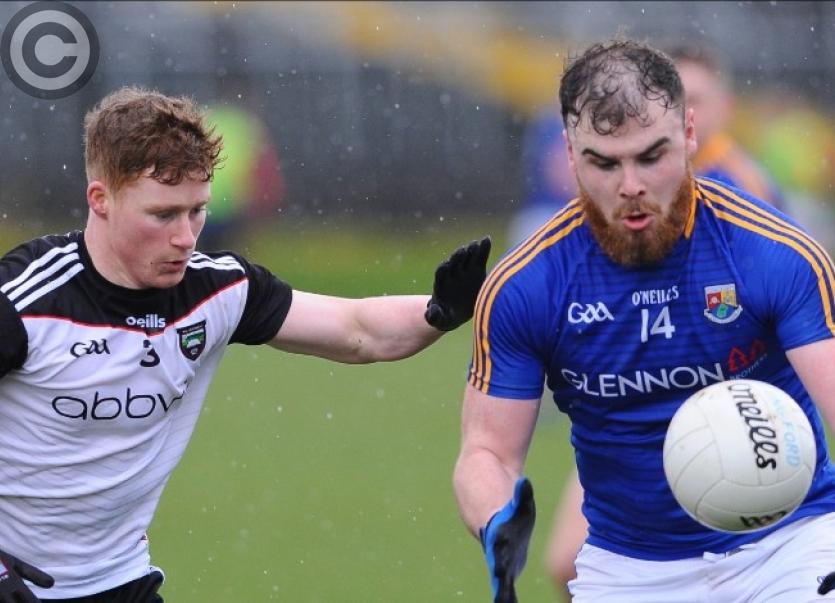 Connor Berry on the ball for Longford in this tussle with Sligo defender Peter Laffey. Action from the NFL Division 3 game at Glennon Brothers Pearse Park on Saturday last. Picture: Declan Gilmore

The threat of relegation was hanging over Longford after losing the last two National League games against Laois and Down and at one stage against Sligo on Saturday last the fear of slipping up again was creeping into the minds of the players.

Manager Padraic Davis must have been fuming with the disappointing first half performance as his side ended up trailing by three points at the break but it was a completely different story on the changeover with the advantage of the stiff wind.

Inspired by a cracking goal from their consistently best player Darren Gallagher, Longford turned on the power in the second half as a total of 2-7 was registered on the way to a fairly emphatic victory in the end.

In eventually asserting their superiority over Sligo with the comfortable margin of seven points to spare (2-15 to 0-14), Longford have now secured safety in the so competitive Division 3 and there is still a glimmer of hope of promotion.

For that to happen they must win their remaining fixture against Westmeath at Cusack Park in Mullingar on Sunday (throw-in 2pm) and hope that Laois lose to Carlow to keep alive the outside chance of snatching second spot.

Westmeath will end up in Division 2 next season if they beat Longford and also the rearranged game against Louth which was postponed last weekend due to the bad weather conditions that left the Drogheda pitch unplayable.

On the basis that Westmeath came out on top at home to Laois and should have got a result in the unlucky single point defeat against Down in Newry, the formbook suggests that Jack Cooney’s side should overcome Longford but that remains to be seen.

James Dolan in defence; Denis Corroon at centrefield and the dangerous trio of John Heslin, Kieran Martin and Ger Egan in attack are the key men on the Westmeath team who will be hard beaten but Longford will be quietly confident of wrecking the neighbouring rivals bid for promotion.