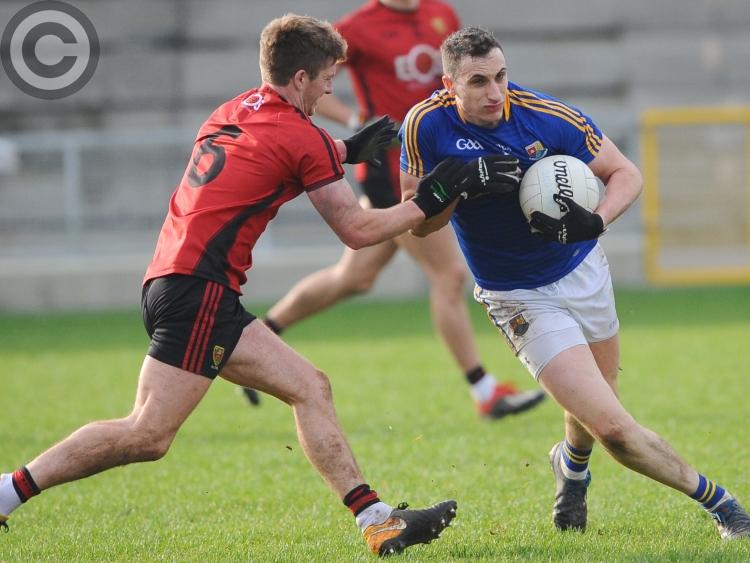 Longford midfielder Darren Gallagher on the ball in this tussle with Down defender Colm Flanagan. Action from the NFL Division 3 game on Sunday last. Photo: Declan Gilmore

After crashing to their first defeat in Division 3 of the National Football League this season, Longford need a positive result against Laois at O’Moore Park this Saturday night (7pm) to remain in contention for promotion.

Thanks to three goals all scored by lethal corner-forward Donal O’Hare, the crucial Round 4 clash at Glennon Brothers Pearse Park on Sunday last saw Down emerge victorious by the comfortable margin of eight points, 3-7 to 0-8.

Longford missed a few goal chances, including a second half penalty, and are facing another difficult task against a Laois side who also lost last weekend against Westmeath in Mullingar.

A strong second half display from Jack Cooney’s charges yielded a vital 0-13 to 0-10 victory to keep the neighbouring rivals in the hunt for promotion in such a tight division with just three points separating seven teams.

Laois, with home advantage, will be confident of getting back on track against Longford and their key players are Colm Begley, Stephen Attride, John O’Loughlin, Kevin Meaney, Donie Kingston, Paul Cahillane and Evan O’Carroll.

Having said that, Longford are getting stronger with the gradual return of the Mullinalaghta men (including John Keegan) a significant boost and Donal McElligott, James McGivney and Patrick Fox were all brought on during the course of the game against Down.

The bad news that Robbie Smyth is gone from the squad at the moment is certainly not helping the cause of manager Padraic Davis but with Darren Gallagher playing exceptionally well at midfield the opportunity is there for Longford to bounce back in Portlaoise.