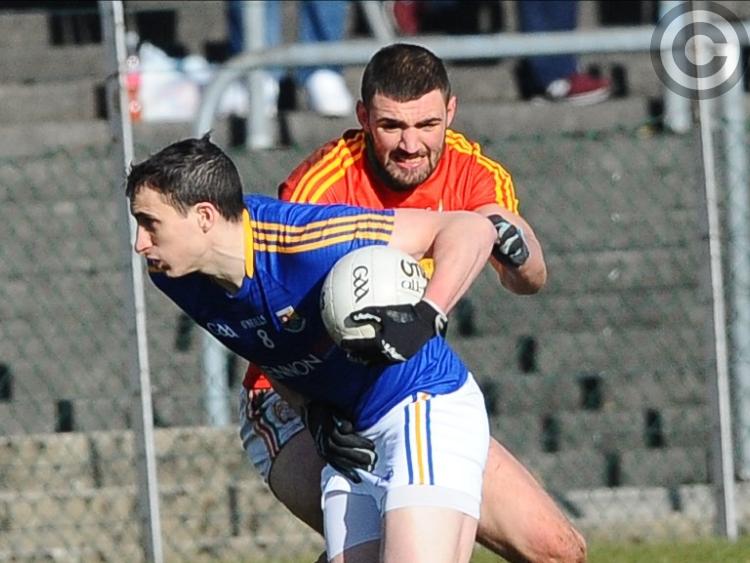 Darren Gallagher on the ball for Longford against Carlow. Action from the recent NFL Division 3 game at Netwatch Cullen Park. Photo: Declan Gilmore

With their Division 3 status almost secured thanks to wins over Louth and Carlow and a draw against Offaly in a wonderful start to the National League campaign, Longford will stand a strong chance of promotion if they can beat Down at Glennon Brothers Pearse Park this Sunday, throw-in 2pm.

Despite the absence of the club-tied Mullinalaghta players, the new manager Padraic Davis has succeeded in guiding the county senior footballers to the top of the table and considerable momentum has been built up with some fringe members of the squad, along with a number of newcomers, making a vital contribution to the positive results so far.

A very tight defensive system is working well for Longford, the only team in Division 3 this season who have yet to concede a goal, but the tougher tests for the entire team have still to come in such a competitive league that has already produced a couple of draws.

While Down are just a point adrift in their desire to make an immediate return to Division 2 after suffering the disappointment of relegation last season, they got off to a bad start with a demoralising 2-15 to 1-12 defeat at home to Laois.

And things almost went from bad to worse in the Round 2 clash away to Sligo but they snatched a very fortunate 1-12 to 1-10 win with a goal deep into stoppage time salvaging the situation. Some key players are gradually returning to the Down squad and they showed a lot of character to take Westmeath in their last league fixture at the Newry grounds.

Reduced to 14 players after full-forward Pat Havern received a straight red card with 23 minutes gone in the first half, Down dug deep to overcome the handicap of numerical disadvantage to emerge victorious by a single point, 0-10 to 0-9, in what was a big boost for them.

After beating Armagh and Monaghan on their way to reaching the 2017 Ulster SFC Final before eventually losing out to Tyrone by eight points (2-17 to 0-15) in the provincial title decider, Down are generally regarded as the favourites to claim one of the two promotion places in Division 3 of the National League.

While the new Down boss Paddy Tally is embarking on his first stint as a senior inter-county manager, he has gathered considerable experience in the game with a coaching role in Tyrone, Down, Derry and Galway.

The most recent competitive game between Down and Longford was in Round 1B of the All-Ireland qualifiers back in 2016 with Denis Connerton’s side springing a surprise in Newry against the mourne county who were relegated from Division 1 of the National League that season.

The visitors won by 2-24 to 3-17 after extra-time in a remarkable high scoring encounter with Donal O’Hare clocking up the most impressive total of 2-9 (8 frees) for the home side.

The current Longford  team, showing a lot of changes from the championship clash three years ago, will hold no fears against Down in the belief that they are good enough to continue on their unbeaten run.

Whoever wins on Sunday will be in pole position in the race for promotion and Longford, powered by Michael Quinn and Darren Gallagher at midfield, will be hoping to make the most of home advantage in their quest to collect two more league points.