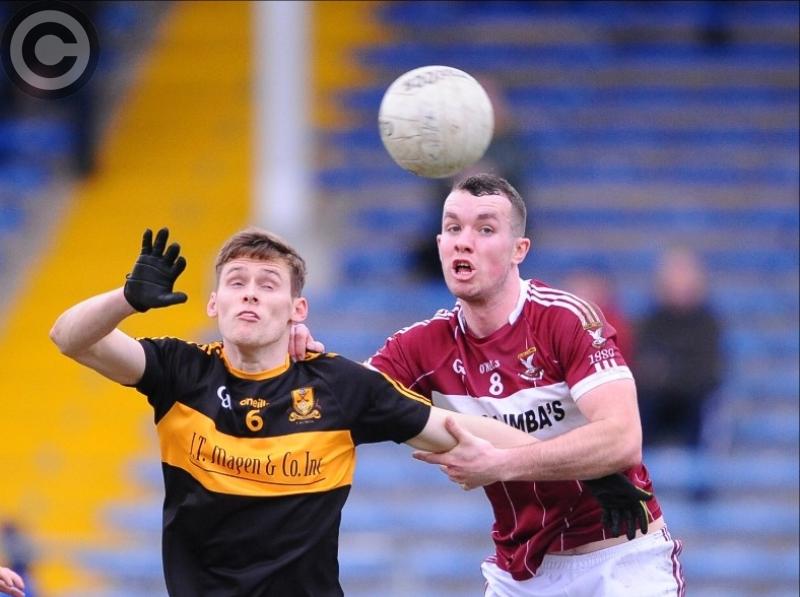 While the Mullinalaghta dream of reaching the All-Ireland Club Senior Football Championship Final at Croke Park on St Patrick’s Day was dashed at Semple Stadium on Saturday last, they done Longford so proud on their magnificent journey and their historic Leinster title triumph will never be forgotten.

Despite their best efforts in such a determined bid to spring another sensational shock they were unable to match a super Dr Crokes side who proved too strong, even when they were reduced to 14 men after key midfielder Johnny Buckley was sent-off with 21 minutes gone in the first half of this intriguing semi-final clash in Thurles.

The 9/1 complete outsiders Mullinalaghta got off to a great start with a goal from a well struck Gary Rogers penalty in the 7th minute and when Jayson Matthews finished the ball to the net in the 19th minute the odds are shortening on what was widely regarded as a mission impossible against such top class opposition.

Then came the straight red card for All-Ireland SFC medal winner Buckley after he lost his cool in a confrontation with Aidan McElligott, at a stage when St Columba’s led by a couple of points (2-1 to 0-5) and stretched the advantage soon after when David McGivney fired over a free.

Excitement was really mounting for the vociferous Mullinalaghta support, boosted greatly by GAA followers from all over Longford and neighbouring counties who comprised the vast majority of the official attendance of 4,064.

But the Kerry and Munster champions, who won the All-Ireland club title in 2017, called on all their vast experience in refusing to panic and came storming back to fire over a further six points to lead by 0-11 to 2-3 at the break.

Switching corner-forward David Shaw out to centrefield turned out to be a very shrewd move as he linked up effectively with Daithi Casey to give the Killarney outfit a decisive edge in this vital sector and a strong start to the second half more or less settled the issue.

Five more scores in a row left Dr Crokes in a commanding seven points lead by the 41st minute but gutsy Mullinalaghta never gave up the fight and managed to close the gap.

A brace of David McGivney frees, along with a great strike from Brendan Fox, left just four points separating the sides midway through the second half and St Columba’s went close to scoring a third goal in the 46th minute when a close range flick from Aidan McElligott was saved by the Killarney keeper Shane Murphy.

Having said that, Dr Crokes launched an immediate counter-attack with their outstanding centre-half-back Gavin White (a worthy winner of the TG4 man of the match award) using his lightning pace to set off on a brilliant penetrating run through the Mullinalaghta backs, only to be denied a goal by the opposing keeper Patrick Rogers.

Rogers also excelled when making another point-blank save to keep out a close range shot from Kieran O’Leary in the early stages of the first half.

The entire St Columba’s defence were under a lot of pressure against a slick and sharp Dr Crokes attack packed with serious pace  and who fired over some great points during the course of the entertaining game.

A score apiece in quick succession from O’Leary and Michael Burns (the last of the starting six forwards to get his name on the scoresheet in the 51st minute) completed the impressive tally for Killarney, ending whatever hopes Mullinalaghta had of salvaging the situation, with just three of the 18 points for Dr Crokes coming from frees.

David McGivney fired a consolation  free over the bar in the 57th minute and just four of the nine scores for St Columba’s came from play, a clear reflection of the overall superiority enjoyed by Dr Crokes who can now look forward with considerable confidence to the All-Ireland club final against the Galway and Connacht champions Corofin.

Most of the damage in Thurles on Saturday last was inflicted by the starting full-forward-line of Shaw, O’Leary and the exceptional No. 15 Tony Brosnan and this always dangerous trio clocked up 13 points between them in contributing greatly to the Dr Crokes victory.

Mullinalaghta made it very difficult for the Kerry kings in the first half and the driving force  wing back Donal McElligott played particularly well for the gallant losers who produced many great memories on their incredible adventure in the club championship.

As what has happened so often in the past, the team with a player sent-off are really spurred on and work that much harder to overcame the handicap of the numerical disadvantage and that was the case for Dr Crokes at Semple Stadium.

When you are able to bring on substitutes in the calibre of serial All-Ireland winners Colm ‘Gooch’ Cooper and Eoin Brosnan to close out the game it must be said that the odds were always stacked against the Mullinalaghta bravehearts.

Some borderline decisions made by the whistle happy Tyrone referee Sean Hurson went against St Columba’s and particularly so when they needed a few breaks in the second half.

At the end of the day the best team won but the Mullinalaghta miracle in taking down the Dublin giants Kilmacud Crokes in the Leinster club final will live long in the memory as one of the greatest achievements in the history of the GAA.

On a slippery surface at Semple Stadium St Columba’s opened the scoring with a well struck long range point from David McGivney in the 2nd minute and after Tony Brosnan fired over the equaliser for Dr Crokes, the north Longford side were awarded a penalty.

Shane Mulligan let the ball in and Donal McElligott was fouled as he burst through with Gary Rogers making no mistake from the spot kick with seven minutes gone on the clock,

The perfect start for the underdogs and while Dr Crokes then stepped up another gear to shoot four points in succession through Tony Brosnan (2), Gavin O’Shea and Brian Looney to lead by the minimum of margins, a second St Columba’s goal materialised in the 19th minute.

A scoring attempt from Rian Brady appeared to be drifting wide but was kept in play by James McGivney and while his subsequent shot was saved by the Killarney keeper the ball broke kindly for Jayson Matthews who was left with the straight forward task of flicking the ball to the net.

When Johnny Buckley was sent-off a couple of minutes later the impossible dream looked like it might become a reality and the Mullinalaghta lead was extended (2-2 to 0-5) when David McGivney converted a free in the 23rd minute.

But Dr Crokes really showed their class to completely dominate the remainder of the first half, a game changing period that yielded a total of six points - a brace apiece from David Shaw and Tony Brosnan (one free) with Daithi Casey and Kieran O’Leary also on target.

There was some respite for Mullinalaghta when Donal McElligott surged forward to shoot over the bar in the 30th minute and they wasted a couple of good chances in the early stages of the second half.

That was the cue for Dr Crokes to regain control and another  glorious spell of brilliant football between the 34th and 41st minutes yielded five more scores through David Shaw, Kieran O’Leary (2), Tony Brosnan and Daithi Casey (free) to leave Mullinalaghta fighting a losing battle.

Having said that, some direct ball in on top of the Killarney full-back-line caused problems with Jayson Matthews going close to getting a vital touch for a badly needed third goal while the same player had a penalty claim turned down by the referee when he appeared to be fouled in the square.

While the deficit was reduced to four points, not forgetting the Aidan McElligott goal chance, the confident Dr Crokes side never looked like letting victory slip from their grasp and they did enough in the final quarter of the contest to consolidate their tight grip on the game.