Away to Carlow in Round 3 of the NFL on Sunday 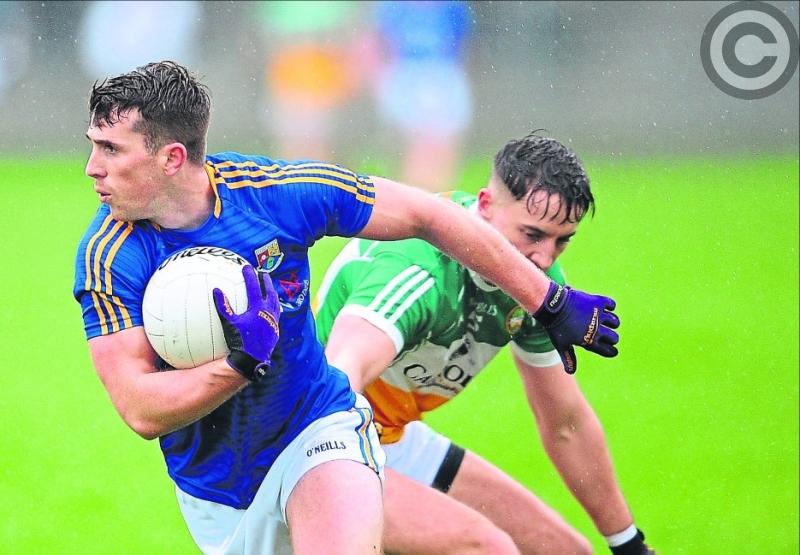 Liam Connerton on the attack for Longford against Offaly. Action from the NFL Division 3 game at Glennon Brothers Pearse Park on Sunday last. Photo: Declan Gilmore

Picking up three points out of a possible four in their two opening Division 3 games is something that has pleased Longford manager Padraic Davis.

The Longford boss is working with a small squad at the moment and was full of praise for the players he has at his disposal. Longford were hit again with injuries on Sunday with Pauric Gill injured in the warm-up and Robbie Smyth coming off injured.

“It has been well documented at this stage. It’s very unfortunate. This should be a story about who we do have as oppose to who we have don’t have. Yes, we are the most depleted team in terms of injury and absenteeism for various reasons. But these lads are really getting on with the job. I think they deserve huge credit for us.”

Davis was pleased with how the new players performed against Offaly on Sunday and also Mark Hughes who was a late introduction to the starting line-up.

“Mark Hughes has come in here today, Nigel Rabbitte too and he had an outstanding first half. Even the subs that have came in; Joe Hagan has come in and done well too. They are all doing their bit to try and get us across the line. So far, so good.”

Although delighted with the fact his side picked up another point and they just conceded nine points, Davis lamented the fact that they failed to make their possession count on the board.

“The thing I am most disappointed with is that we only got 1-6 on the board; it’s not enough for the amount of possession we have. I said to them at half-time that they were doing everything right until they get to the final third and that’s where it was breaking down.

"Again though to only concede nine points. From that point of view they deserve huge credit for the way they are keeping opposition teams out but we would like to keep the scoreboard ticking over.”

Despite not making possession count Davis commended the commitment his panel of players have shown in the last few weeks. He is hopeful they will be rewarded for their endeavours.

“Every last member of this panel, has given us as a management team, everything we have asked from them. After that, sometimes results nearly become a sideshow. Nobody could question out there against Offaly the willingness, desire and commitment. Once you have that and a bit of honesty the rest will come.”

Top of the table clash at Netwatch Dr Cullen Park

Longford will be bidding to maintain their unbeaten run in Division 3 of the Allianz National Football League on Sunday when they make the trip to Netwatch Dr Cullen Park to face Carlow, throw-in 2pm.

After two rounds, understrength Longford - minus their club-tied Mullinalaghta St Columba’s contingent and a number of injured players - have three points from a possible four and that is something positive for manager Padraic Davis to build on.

Similar to Longford, the Carlow men have three points from a possible four, so something will have to give inn Sunday’s tie - effectively a top of the table clash - where Longford can certainly take nothing for granted.

In a division where tight margins could be the difference between relegation and survival or promotion, Longford will be hoping that they can learn from the errors that riddled their play against Offaly and come back from Carlow with a result.