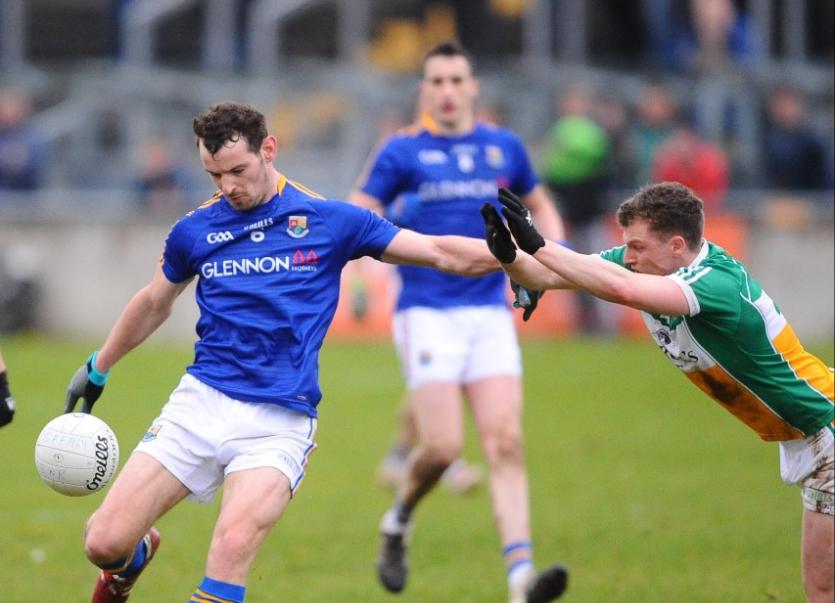 Barry Gilleran pictured in action for Longford against Offaly in the opening round of the 2018 National Football League Division 3 at O'Connor Park, Tullamore. Photo: Declan Gilmore

Barry Gilleran always let his football do the talking so it was no surprise his retirement from inter-county football went unnoticed with no ‘farewell statement’ from the towering defender.

The Longford Slashers clubman admitted retirement was the right decision for him.

“I probably thought about it five or six years ago but then I kept coming back every year. I’m not going to lie, I will miss it but it was the right decision for me to make at the time.

“I had good chats with Padraic (Davis) and wished them all the best. At 33 now, I feel like I have given my best and will concentrate on Slashers for a couple of years. We’ll hope for the best there.”

Gilleran made his debut against Derry in the All-Ireland SFC Qualifiers in 2006. His first start for the county against Kerry in his next game pitted him against Kieran Donaghy who had been moved into full-forward. Gilleran found the going tough that day but it was how he got over it that made him one of Longford’s best defenders.

Gilleran said: “Everyone is different. People are big into the psychological aspects of the game, that’s not me. I’m a very laid back person. I take everything in my stride.

“In 2006 my debut was against Derry and to this day it was probably one of my best games; I came on after 15 minutes.

“It’s funny how it turns out, the next week against Kerry I came off after 15 minutes. I wanted the ground to swallow me up at that time. What do you do? You pick yourself up and go again. If you dwell on these things you are going nowhere.”

The defender is not a fan of a two tier championship and it’s not surprising his most memorable games for the Longford senior team are qualifier wins.

“Derry in 2006 was huge. Then you look at Monaghan (2016) a few years ago. Another one Derry up in Derry (2014). We had about 50 supporters. Nothing was expected from us. We went out and performed well as a team and managed to come out the right side. It was a great victory. All the papers were against us. It was fantastic,” commented Gilleran.

Looking at the year ahead for Longford and the start of the National league Gilleran believes the first two games are so important.

“Like every year the first two fixtures in the league are vital. The lads will know that. They will need to put the shoulder to the wheel and try and get a couple of results and that sets you up for the year. I have no doubt there are quality players there.”

Barry is very thankful to his family for all they have done for him throughout his footballing career and in particular his father Mick.

“I remember from the first day I started playing football he was up at practically every training session and match. Without a shadow of a doubt my dad was always there for me. The family’s support is very much appreciated in my career as a footballer.”

With club football returning soon Gilleran is looking forward to getting back out with Slashers. It’s a young side but they have the experience of Gilleran and Dermot Brady.

Barry joked: “There is another 10 years left in him (Brady). He’s waiting in the wings for the Over 40s (Masters football).”