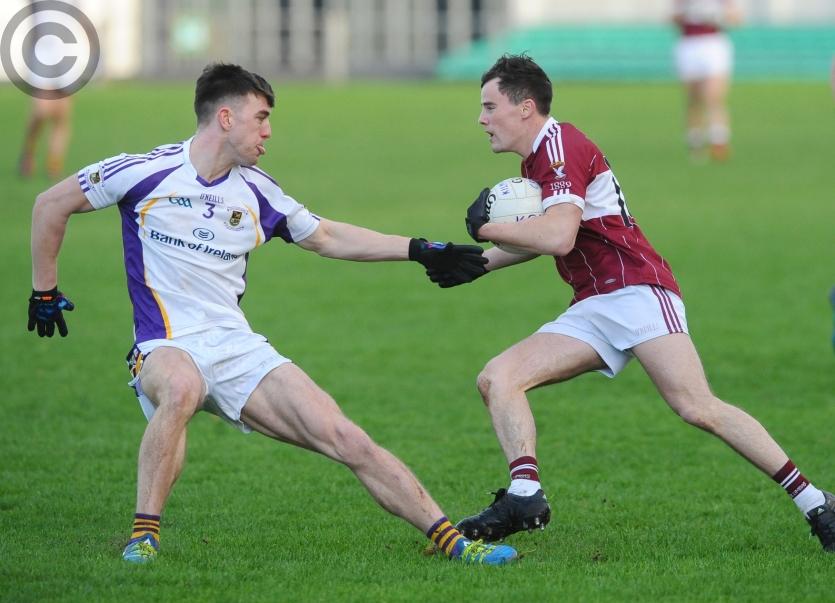 Rian Brady on the attack for Mullinalaghta in his bid to get past Kilmacud defender Andrew McGowan. Action from the Leinster Club SFC Final in Tullamore on Sunday last. Photo: Declan Gilmore

Never before has a team from such a small county like Longford succeeded in winning this prestigious competition but that all changed in a dramatic finish that ignited wild scenes of jubilation when the final whistle was eventually blown following five agonising minutes of stoppage time.

Courageous St Columba’s somehow found the energy to battle back from three points down in the closing stages when they appeared doomed for failure and it was a brilliant move that yielded the decisive match winning goal from a penalty converted by Gary Rogers in the 59th minute.

James McGivney linked up with Jayson Matthews who picked out Donal McElligott and his perfect pass into his brother Aidan ended up with the younger McElligott getting fouled in the square by Kilmacud defender Cian O’Sullivan.

Up stepped Rogers to take the pressure kick and he confidently planted the ball in the corner of the net, much to the sheer delight of the thousands who were supporting Mullinalaghta on Sunday last.

They came from all over the county and surrounding areas and as such the vast majority of the 3,500 attendance were rooting for the Longford champions who just refused to accept defeat in their fierce desire to create history.

It was a bit like watching the final scenes of the famous ‘Rocky’ film as Mullinalaghta struck the knockout blow, forcing the Dublin champions into submission, and they were reeling on the ropes when Aidan Mc Elligott shot over the bar in the 60th minute to extend the lead to two points.

It was an incredible recovery as St Columba’s enjoyed a new lease of life when it mattered most and Kilmacud were shattered by the shock of letting victory slip from their grasp so late in the game.

Mullinalaghta actually missed another couple of other scoring chances and Kilmacud's tale of woe was complete when Dublin star  Cian O’Sullivan was sent-off after receiving a second yellow card in the fourth minute of stoppage time.

It was a famous success for the small half-parish situated on the Cavan border, ironically in the 50th anniversary year of Longford’s first and only Leinster Senior Championship win back in 1968, and the braveheart St Columba’s players have brought tremendous honour to the county with this massive achievement.

Manager Mickey Graham, very much the messiah, has worked wonders since he first took charge of Mullinalaghta in 2016 and they have developed into a serious side under the shrewd tuition of the Cavan man, going on to complete a three-in-a-row of Longford senior championship triumphs.

Their reward for winning the Leinster club title against all the odds is a crack at the Kerry kings Dr Crokes Killarney in the All-Ireland semi-final on Saturday February 16 and who knows what might happen in two months time in the race to reach Croke Park on St Patrick’s Day.

In the meantime the mighty Mullinalaghta men can savour this terrific win over Kilmacud Crokes in their celebrations. It must be said that outstanding defender Patrick Fox was a worthy winner of the TG4 man of  the match award for the resolute and disciplined manner in which he contained the threat of Dublin All-Star Paul Mannion who failed to score from play on this occasion.

At the other end of the pitch and not very far behind in the order of merit was attacker James McGivney whose workrate was immense while experienced duo John Keegan and Donal McElligott were others to figure most prominently for the new Leinster club champions.

While Mullinalaghta took the lead when their influential chief marksman Rian Brady (who scored 4 points)  landed a long range score with just 12 seconds gone on the clock, they suffered a significant setback in the 5th minute when Pat Burke fired home a fine goal for Kilmacud.

But back came St Columba’s with the advantage of the stiff wind and after Rian Brady blasted the ball over the bar when a goal was there for the taking in the 9th minute after a great catch by James McGivney, three more points in quick succession were registered by Brady, Donal McElligott and David McGivney (free) between the 18th and 20th minutes.

That left Mullinalaghta leading by 0-5 to 1-1, with Callum Pearson accounting for the first Kilmacud point in the 12th minute.

As it turned out St Columba’s failed to register another score until the 50th minute with the opposition kicking four points in a row and were seemingly set for their expected victory.

Paul Mannion converted a free in first half stoppage time to leave the sides all square at the break (0-5 to 1-2) and it now looked like a real uphill battle for Mullinalaghta who were playing against a significant wind in the second half.

Having said that, nine minutes were gone on the changeover before Kilmacud got their next score through a well struck effort from big midfielder Craig Dias to take the lead.

Two more points followed from Callum Pearson and Paul Mannion (free) before Mullinalaghta eventually got their first score of the second half from a free converted by Rian Brady following a foul on James McGivney with ten minutes of normal time remaining.

Moments later Pat Burke slotted the ball over the bar to leave Kilmacud 1-6 to 0-6 ahead but St Columba’s were given a glimmer of hope with a well struck point from David McGivney in the 56th minute.

What happened next will live long in the memory of all those Longford people who were in Tullamore on Sunday last to witness one of the most remarkable stories in the history of the GAA as Gary Rogers kept his cool to score the crucial penalty goal.

Mullinalaghta were now 1-7 to 1-6 ahead and there was going to be no way back for the stunned Kilmacud side with the immediate Aidan McElligott point clinching the Leinster title as a dream became a reality.