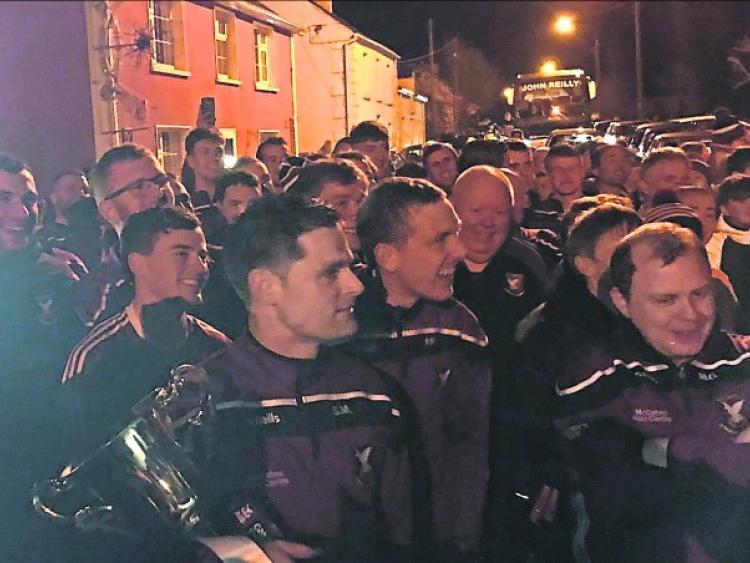 Home are the heroes with the Leinster Cup in Mullinalaghta on Sunday evening.

Once upon a time in a half parish not all that far away the 400 or so inhabitants had a dream. They dreamed that one day their band of 30 Mullinalaghta St Columba’s men would win a Longford Senior Championship title.

It hadn’t happened for a very long time, you see, 66 years in fact since that dream was last realised and those men, then, had left behind them a very rich and lasting football legacy indeed.

As the years passed by the men and their supporters fought hard.

And on a majestic day in 2016 the dream was realised and the band of Mullinalaghta warriors clinched that much coveted Longford senior crown.

The 400 or so inhabitants continued to dream and for the next two years the senior title took pride of place at home in Mullinalaghta.

And last weekend, those 400 or so inhabitants dared to dream again, to dream of  winning the Leinster club title - the first for Mullinalaghta, the first for Longford.

And, “Good God Almighty”, the inhabitants screamed in disbelief, as that supposedly impossible  dream came true as well.

“Unbelievable,” they cried, “this is the stuff of dreams; who could have imagined this.”

The story goes that it is this band of Mullinalaghta men that prefered to bring their football boots to school rather than their pencil cases.

From the day they started national school they piled into cars and led by Dan McElligott  trained hard and fought many good battles on the pitch to realise their dream.

It is this band of men too who after every big win since 2016 pay their respects to the footballers and supporters who also dared to dream and who now lying peacefully in the local cemetery.

Sunday was no different, before any celebrations were had, the St Columba’s men got off the bus and spent a few minutes with the McCabe cup in the graveyard.

“They are smiling down on us,” remarked club PRO Thomas McNerney, “that is for sure”.

Meanwhile, the atmosphere was electric by the time the team got to Mullinroe Crossroads where the bonfires were lit and the fireworks crackled high in the sky.

And as they marched to centre stage those heroic men were led in by the Longford Pipe Band, and the occasion was simply magic.

“I want to congratulate and say thank you to the lads who put in a trojan effort against all the odds and all the disbelievers - we were told that the fairytale would end and that didn’t happen thank God,” St Columba's Chairman John Keegan told those gathered at the crossroads.

“Have a great night, enjoy the celebrations and stay safe,” stated Keegan whose son John lined-out at midfield for Mullinalaghta.

Dreams and fairytales do not happen though without belief, determination and support, do they?

And Mullinalaghta had all of this in bucket loads - from the first day of battle to that last day of the sweet, sweet victory over Kilmacud Crokes on Sunday last.

When captain Shane Mulligan chatted to the massive crowd that gathered at the crossroads  to welcome their heroes home, he too alluded to that support which by now is county, country and  even world wide!

“They were out in force to welcome us home in Ballinalack, in Edgeworthstown and in Granard,” he smiled. And we all appreciate that support so very much,” said Shane.

Last Sunday when the dream of this magnitude was realised for the 400 inhabitants or so in Mullinalaghta it was emotional, it was joyful and it was liberating.

It was a dream come true.