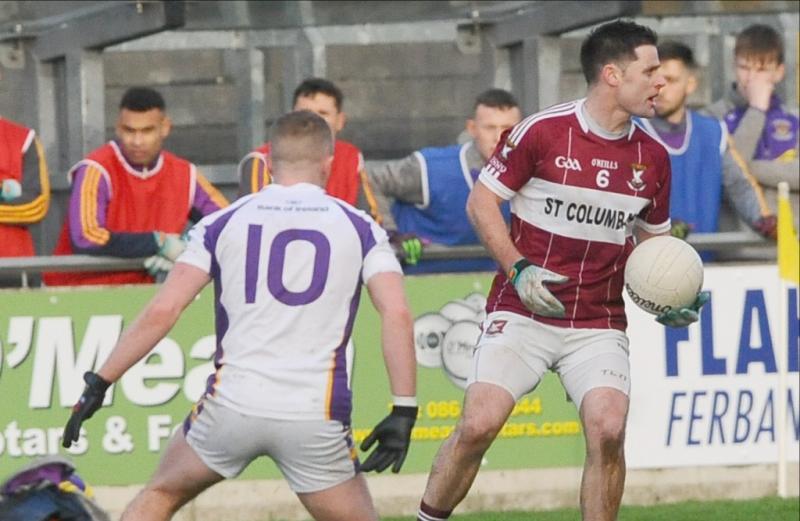 St Columba’s captain Shane Mulligan said that the Mullinalaghta side were not going to let go or give up on Sunday.

Their never say die attitude saw them claim the Leinster Senior Club Football title with a win over Kilmacud Crokes.

“Once Gary tucked it away I knew we were going to hang on. The whole thing was not letting go, not giving up or letting the heads down.”

Leading his side to a provincial title left the normally chatty Shane somewhat speechless and unable to put his emotions into words.

“It will probably never sink in. It’s hard to put into words. It’s an incredible feeling. It was a helter skelter game. To get over the line is just incredible.

“You can see what it means to be people that are here; the support that has come from everywhere, all over the world to be here and witness this history.”

Mullinalaghta had tremendous support not just at the match but following on social media, radio and TV.

The support was from all over the country and further afield. Their story in just reaching the Leinster Final had captured the hearts and minds of people. Mulligan dedicated the win to not just Mullinalaghta people but the people of Longford.

“Everyone loves to see the underdog story; David versus Goliath. We were happy to take that on and we appreciate the support.

“We have extended the boundaries of Mullinalaghta to around the county. We are so appreciative to the people of Longford. This is for them as well.

“I never dreamed I would witness anything like this. History has just been made and will never be taken away.”

Sunday’s success was a culmination of hard work and determination over the past three years. For Mulligan and this current crop of Mullinalaghta players they are experiencing a golden age.

“There is great heart in that dressing room. The lads would back each other 110%. We battled hard and we have been on the road a few years and have taken knocks and haven’t normally managed to cross the line.

“We are really living a charmed life at the minute. It’s like we are in a bubble. We are on the crest of a wave,” said the captain.

Mulligan said that when Gary Rogers tucked away the penalty in the 59th minute to put them back in front that they were not going to let the lead slip. They did just that as they went on to create history.

“The guys just never gave up. Credit to Gary. All the pressure that was on that man’s shoulder in those few moments and to take that on and tuck it away in that manner. You have to take your hat off. I knew once we went back in front we were not letting it go.”