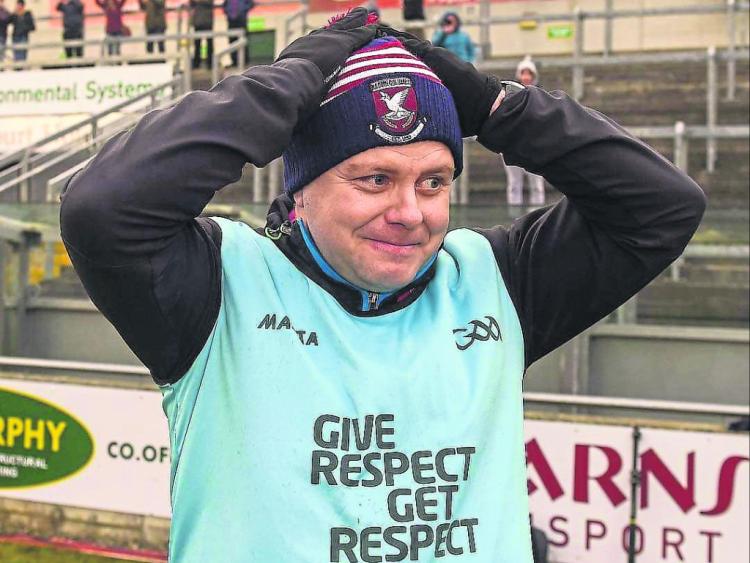 Unbelievable! Mickey 'the Messiah' Graham, the man who guided Mullinalaghta St Columba's to Leinster Club SFC glory is pictured at the final in Tullamore on Sunday last.

An emotional Mullinalaghta manager Mickey Graham struggled to find the words on Sunday to describe how he felt after his side claimed the Leinster Senior Football title; a first provincial club title to be won by a Longford team.

“If I didn’t have a heart attack today, I’ll never have one. That game had all the emotions. It is very hard to describe. I just can’t get my head around how the game panned out,” said the Mullinalaghta boss.

St Columba's have some talented footballers but it’s their persistence and willing to never give up that came to the fore on Sunday. They were down by two points before Gary Rogers put away a penalty and Aidan McElligott’s point sealed the win.

Graham said: “Heart, determination, guts; you can’t buy that. It’s either in you or it’s not and these boys have it. It’s just unreal.

“What this has done for club football in Longford is second to none. There’s a number of clubs in Longford who could have been in this situation.”

Mickey said that all his side needed was one goal chance and that came about thanks to the penalty converted by Gary Rogers.

“We always said we needed one goal chance and had to score it and we did. My God these lads don’t lack for determination, guts and never say die attitude.”

Graham dedicated the win over Kilmacud to every rural club in the country. Mullinalaghta’s win will no doubt give other clubs the belief that anything is achievable.

“This shows there is still life in an underdog and there is hope for smaller clubs out there. This is just a win for every rural club throughout the country.”

The Mullinalaghta story is a phenomenal one and their success on Sunday showed how important club football is. It is the lifeblood of the GAA.

Graham said: “This sums it all up. The roar of the crowd today. Even if we had lost the roar would still have been the same; they would have clapped them boys off the field. They would have given them their due rewards and that’s all we can ask for.

“Mullinalaghta people don’t expect much, they just want lads to go out and give it their all. That’s the one thing about this team and they’ll give everything they have.”

With an All-Ireland semi-final against Dr Crokes Killarney to look forward to on February 16th it means that Graham’s stay as Mullinalaghta boss has been extended by a further two months. What does that mean for Graham and the Cavan job?

“It’s something that I will have to sit down now and look at. Maybe make arrangements with regards where we go from here.

“It’s been very tough the last five or six weeks trying to keep the whole thing on the go. We’ll give the boys here a break for a couple of weeks.

“I’ll go back to Cavan and try and get them organised there. I wouldn’t swap this for anything. This is a great place to be in,” concluded Graham.