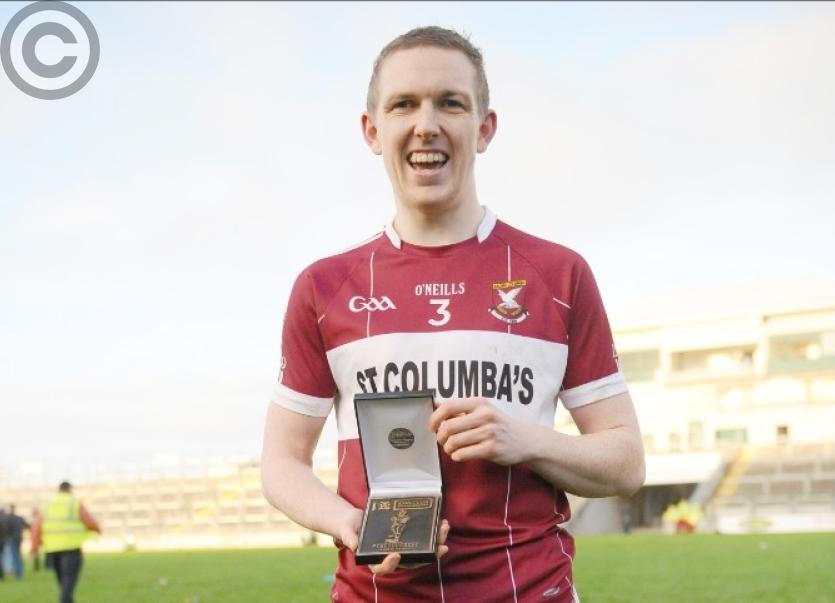 In previous games Mullinalaghta have shown their battling qualities and their never say attitude and once again on Sunday last those qualities came to the fore.

St Columba’s came from behind to claim the Leinster Senior Football Club title with two points to spare over Dublin champions Kilmacud Crokes in the final at O’Connor Park in Tullamore.

Speaking after the game, the TG4 man of the match Patrick Fox said that Mullinalaghta’s battling qualities were what got them to the final and saw them become Leinster champions.

“It’s that attitude that got us there today. With a few minutes to go on the clock it wasn’t looking good; we were two points down when we got the goal.

“That’s the never say die attitude. The boys never stopped working and trying. The goal came at the perfect time.”

The coolest man in Tullamore was Gary Rogers whose penalty proved to be decisive. Donal McElligott normally takes the penalties but he had received a knock. Fox believes the lads would have done their homework in case a penalty was awarded.

“The lads usually work it out before the start of the match about who will take the penalty. The lads would have done their homework and would have seen that Nestor saved a penalty to the right the last time against Portlaoise.

“Just drill it hard and low and you have a great chance. Gary is a great penalty taker and he showed it there.”

Fox, who had the job of marking Kilmacud ace marksman Paul Mannion, was outstanding on Sunday and rightfully claimed the man of the match award.

Patrick  has become not just the best full-back in the county but one of the best defenders in the province. He was modest about his award. “I had a huge amount of hard workers around me. The work-rate of the boys; the amount of tracking back they done.

"I even saw Jayson Matthews in the first half back in the full-back line. That’s just the work the boys put in. We said we would leave nothing to chance and we weren’t going to die wondering.”

After playing with a strong wind in the first half Mullinalaghta went in at half-time level. Fox admitted that they had the belief that they could kick on and create history by becoming the first Longford club to win a provincial senior club title.

“We knew if we could keep it tight for as long as possible we felt that come the last 15 minutes we could make that burst and drive on.

“We had a lot of work done fitness wise. It’s a credit to Mickey (Graham) and the boys for the strength and conditioning.”

Once again Mullinalaghta got fantastic support not just from their parish but the county of Longford and from parts of Cavan, Westmeath and other places.

“It was unbelievable and that’s a credit to Longford. They always row in behind the county champions. The roar from that stand,” stated the delighted Mullinalaghta defender.