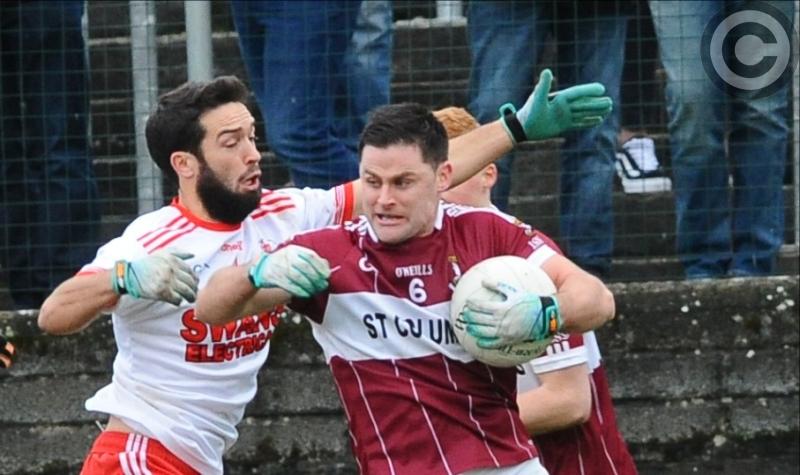 GAA history was made at Glennon Brothers Pearse Park on Sunday as St Columba’s became the first team from Longford to reach the Leinster Club Senior Football Championship Final.

After recovering from a slow start, the Mullinalaghta men produced a magnificent performance to crush Carlow opponents Eire Og by the landslide margin of 18 points in marching on to meet Kilmacud Crokes in the provincial title decider on Sunday December 9.

While their cause was helped when Eire Og attacker Ross Dunphy was sent-off (straight red card) just before the break, St Columba’s were in a comfortable 0-6 to 0-1 lead at that stage with the points coming from Donal McElligott, Brendan Fox, David McGivney (2), Rian Brady and Gary Rogers.

Mullinalaghta ran riot in the second half to outscore their demoralised opponents by 2-9 to 0-2 and the goals were scored by James McGivney (44th minute) and Aidan McElligott (49th minute).

Outclassed Eire Og ended up with 12 players on the pitch with Chris Blake (second yellow card) and goalkeeper Robert Moore (a straight red for losing his cool in a clash with Aidan McElligott) also dismissed in the 46th and 50th minutes respectively.

The small club from north Longford situated on the Cavan border have brought great honour to the county and some of the football they played on Sunday was real quality stuff, to say the least, with nine different players getting their names on the scoresheet in this demolition job.

Dublin champions Kilmacud Crokes beat Portlaoise by three points (1-17 to 3-8) in a pulsating semi-final at Parnell Park on Sunday.