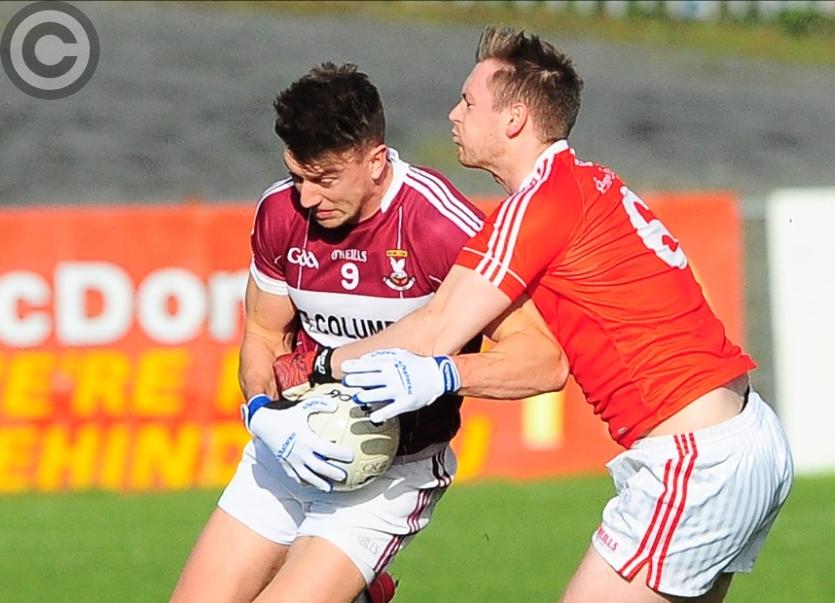 A very significant piece of GAA history will be made at Glennon Brothers Pearse Park on Sunday if Mullinalaghta succeed in making it through to the Leinster Club Senior Football Championship Final.

Since this prestigious competition started back in 1970 no team from Longford has contested the senior club provincial title decider despite some great performances down through the years.

While St Columba’s are generally regarded as the favourites to make the big breakthrough they will need to be wary of the challenge they are facing against Eire Og, a club steeped in tradition after winning no less than five Leinster Club SFC titles between 1992 and 1998.

The current Eire Og side were rather raw in losing out to Mullinalaghta by seven points in the first round clash at Pearse Park last season with the 1-14 to 1-7 scoreline suggesting a comfortable win for the Longford champions.

While St Columba’s dominated the first half to  build up a commanding 0-8 to 0-1 advantage at the break, it developed into quite a struggle on the changeover as the gap was cut to three points in the lengthy injury stoppage time as Laois referee Seamus Mulhare  added on a total of eight additional minutes.

Mullinalaghta put the issue beyond all doubt on the stroke of the eventual final whistle when Gary Rogers scored a cracking goal and have gathered up considerable experience since making their first appearance in the Leinster Club SFC in 2016.

Their remarkable journey all started with a win over Stradbally (Laois) and Mickey Graham’s side then sprang a surprise in the next round when getting the better of the strongly fancied St Loman’s Mullingar.

It was back to Pearse Park for the semi-final of that exciting provincial adventure against the might of St Vincent’s with the Dublin champions eventually emerging victorious but not without some difficulty.

Two more wins in Leinster were registered against Eire Og last year and most recently against Rhode in Tullamore.

But there was bitter disappointment when Mullinalaghta let victory slip from their grasp in the 2017 quarter-final clash against St Loman’s Mullingar and the Westmeath champions should have won the Leinster title only for a dramatic late collapse against Moorefield (Kildare) in the final.

Beating such a vastly experienced Rhode team in crossing the first hurdle in the current campaign was a great result for St Columba's but that will count for nothing if they should happen to slip up against Eire Og who were crowned the Carlow champions for the 28th time this year.

That is a magnificent record and a wiser Eire Og team will return to Pearse Park on Sunday (throw-in 1.30pm) in a fairly confident frame of mind with a fierce desire to gain revenge for the defeat against Mullinalaghta last year.

First half goals from big full-forward Murtough Ware and defender Brendan Kavanagh (both of whom have played for Carlow) laid the foundations for their comfortable 2-9 to 0-8 win over Newtown Blues in the quarter-final at the Drogheda grounds.

Former county forward Simon Rea (who did not feature in the match against Mullinalaghta last season) fired over two points against the Louth champions in the previous round and four members of the Eire Og team started for Carlow in the Leinster SFC semi-final against Laois at Croke Park this year.

The key players in question are Sean Gannon, Eoghan Ruth, Darragh O’Brien and Jordan Morrissey and with Carlow football very much on the rise it must be said that Eire Og will certainly not fear St Columba’s.

So Mullinalaghta are well warned in the build up to the big match but they are backboned by a lot of quality players who have lined-out for Longford.

It is the total commitment shown by every member of the team that continues to be a vital factor for the three-in-a-row county champions and they should be capable of earning a crack at Kilmacud Crokes or Portlaoise in the Leinster Club Final on Sunday December 9.