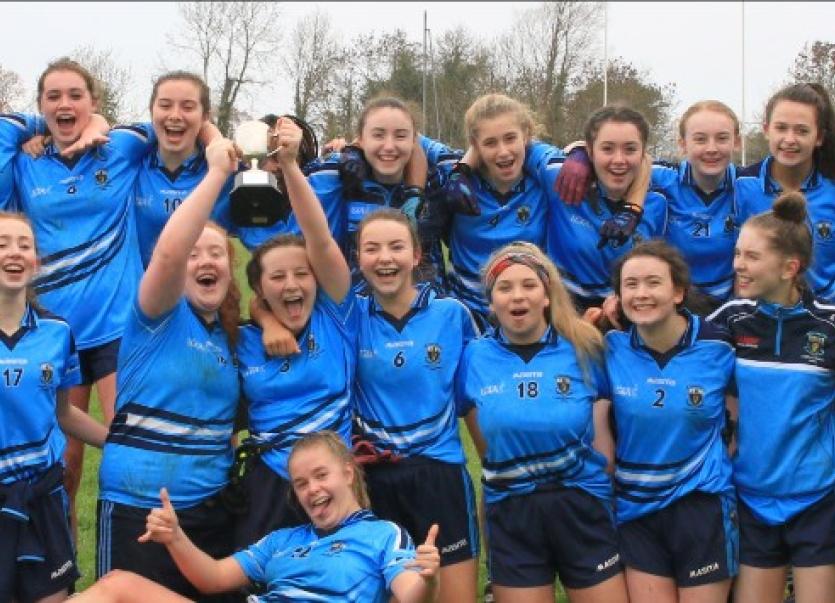 Longford Slashers U-18 ladies celebrate following their win over Clonguish in the Minor 'A' Championship Final on Sunday last. Photo: Syl Healy

Longford Slashers U-18 ladies won the Minor ‘A’ championship title for a magnificent sixth year in a row when they proved too good for Clonguish in the county final at Emmet Park, Killoe on Sunday last.

Slashers started with the breeze in their backs and proceeded to take the game to Clonguish from the first minute. An early Kara Shannon wide was followed by points from Grace Shannon and a free from Jessica Barry.

This was followed by a Kamille Burke wide in Clonguish’s first attack. Slashers centre-half-back Orla Nevin then went on a great run and finished  with a super strike to find the net for Slashers first goal. Clonguish midfielder Ciara Healy then collected a pass after a quick free to lob the ball over the Slashers keeper for Clonguish’s first goal in reply.

This was followed by a Jessica Barry point for Slashers before Ciara Healy came to the fore again when she scored a point and followed up immediately with a goal to leave Clonguish ahead by a point with 11 minutes gone.

In the second quarter the Slashers girls took control of the game when they hit back with goals from Kate Shannon and Aishling Smith. A Kara Shannon wide was followed by two excellent Holly Carrigy points and then Slashers struck for another goal when Kate Shannon shot to the top corner of the net with 20 minutes gone.

The Clonguish backs were under pressure at this stage and a Ciara Healy wide from a Clonguish attack only proved a short respite when Grace Shannon struck for another Slashers goal after very good approach work.  Jessica Barry pointed just before the break to leave the half-time score at 5-6 to 2-1 in favour of the reigning champions.

Clonguish  were a different team on the changeover  and with the aid of the breeze they proceeded to cut into the Slashers lead as the second half wore on.  Kate Shannon got an early point for Slashers before Clonguish took over and after 3 wides in a row, centre-half-forward Hannah Glennon pointed. This was followed by a Kamille Burke wide before she got on the scoresheet with a fine point.  Slashers then got a free which Jessica Barry pointed with 14 minutes gone in the second half.

A Clonguish wide by Natasha Hourican was followed by a point by Ciara Healy and then a splendid goal from full-forward Cliona Allen gave their supporters hope with 10 minutes left.

However the Slashers backs were keeping the Clonguish forwards at bay with some great defending and despite having a lot of possession Clonguish could not put scores on the board.

A Ciara Healy point and a goal just on full-time was all they had to show for their efforts and Slashers ran out worthy winners in the end to win a remarkable six minor championships in a row.