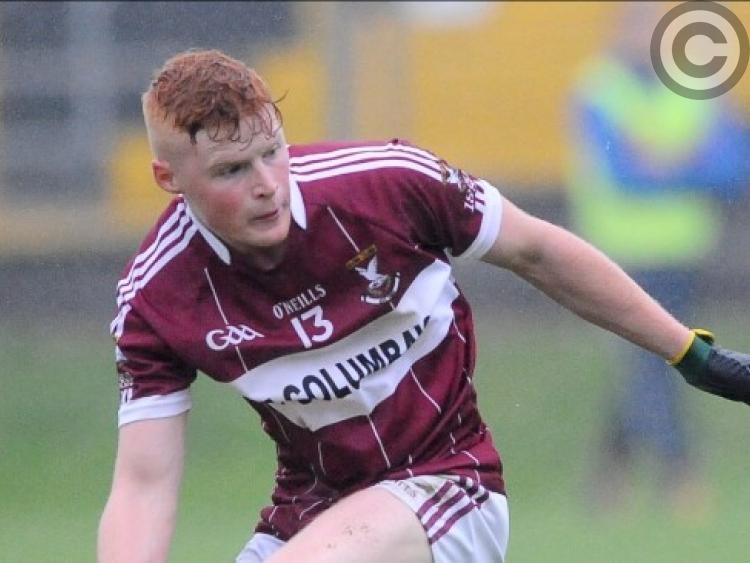 Jayson Matthews, who scored the decisive goal for Mullinalaghta in the win over Rhode.

Mullinalaghta made a major step in their quest to become the first team from Longford to reach the Leinster Club Senior Football Championship Final when they scored a great win over Offaly opponents Rhode at Bord na Mona O’Connor Park on Sunday.

Jayson Matthews scored the decisive only goal with eight minutes gone on the changeover and with the extra man advantage after Rhode were reduced to 14 players when defender Brian Darby was sent-off in the 18th minute of the first half St Columba’s were able to consolidate their slender lead in this tough quarter-final clash.

Having said that, it might have been a completely different story but for a disallowed Rhode goal (Anton Sullivan) for a square ball infringement moments before Matthews flicked the ball to the net at the other end of the pitch in an immediate Mullinalaghta counter-attack after his first attempt was parried against the crossbar by the opposing keeper Ken Garry.

That proved to be a serious swing with St Columba’s now leading by 1-3 to 0-4 and they showed a lot of character in getting the better of the vastly experienced Rhode outfit and particularly so in Tullamore.

The reward for Mickey Graham’s totally committed side is a home match in the semi-final against Eire Og (2-9 to 0-8 winners over Louth’s Newtown Blues) with the Carlow champions coming to Glennon Brothers Pearse Park on Sunday November 25.

Mullinalaghta would now appear to stand a strong chance of creating history in their bid to reach the provincial title decider against Kilmacud Crokes or Portlaoise.