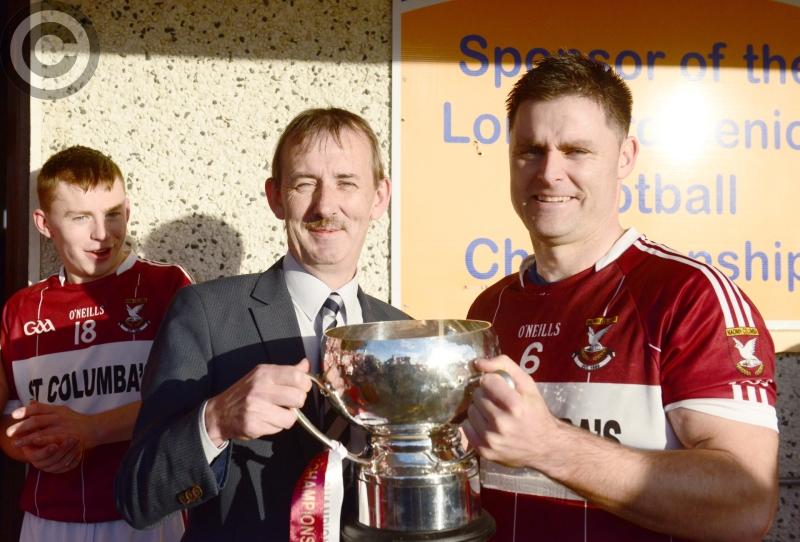 There was just no stopping mighty Mullinalaghta who cruised to a very easy win over Abbeylara in a completely one-sided Senior Football Championship final replay at Glennon Brothers Pearse Park on Sunday last.

The wide margin of 15 points separated the sides in the finish as classy St Columba’s produced their best performance this year to retain the Connolly Cup and thus join the distinguished list of clubs who have achieved a three-in-a-row of county SFC titles.

It is a magnificent feat, to say the least, and while the impressive David McGivney collected the prestigious man of the match award it was a tremendous team display by the north Longford club.

Despite conceding a goal with just over two minutes gone in the game when Colm P Smyth got Abbeylara off to a dream start with a cracking goal, Mullinalaghta gradually got on top and ended up in a commanding 1-8 to 1-1 lead at the break.

A brilliant move yielded the goal from Rian Brady in first half stoppage time and this proved to be a shattering blow from which Abbeylara never recovered.

While Robbie Smyth landed a well struck point from play with five minutes gone in the second half, his side failed to register another score during the remainder of the match whereas St Columba’s added another 1-6 to their most emphatic tally.

Captain Shane Mulligan scored the goal in the 54th minute to inflict even more misery on poor Abbeylara who have now suffered the bitter disappointment of losing the county title decider for the fourth year in succession.

Mullinalaghta were so much in control that they could afford the luxury of missing a penalty when James McGivney drove his kick high against the upright in the 46th minute and a few other goal chances were wasted in the second half such was their  superiority.

So for the third year in a row Abbeylara (minus experienced defender Cormac Smyth) had to settle for second best against St Columba’s in the county final and this was a very demoralising defeat.

The Abbeylara  supporters among the estimated 3,500 attendance might have felt it was going to be their day when Brian Smyth sent his brother Colm P racing through for a great goal after just two minutes but back came Mullinalaghta  to close the gap with a point apiece from David McGivney (free) and Rian Brady, a terrific strike from near the sideline.

Abbeylara got their second score in the 10th minute from a free converted by Nigel Rabbitte but the Mullinalaghta machine then clicked into top gear in the perfect conditions after the extreme difficulty of the wet and windy elements that caused havoc in the dour drawn game the previous week.

David McGivney, operating effectively around the middle of the field, fired over a free and five wonderful points (all from play) followed from different players in a glorious spell between the 14th and 27th minute.

Rian Brady, John Keegan, Jayson Matthews, Brendan Fox and Shane Mulligan all shot over the bar to give the reigning champions a comfortable cushion (0-8 to 1-1) and then came the decisive goal in stoppage time.

A well-worked move ended up with Rian Brady planting the ball in the back of the net and there was really no way back for Abbeylara who suffered another setback when losing the injured Jason Kelly in the closing stages of the first half.

Trailing by seven points at half-time, there was a glimmer of hope when Robbie Smyth registered a point early on the changeover but things went from bad to worse for outclassed Abbeylara.

Apart from the major impact made by David McGivney, others to figure most prominently for St Columba’s throughout the game were full-forward Rian Brady, midfielder John Keegan and Shane Mulligan and the slick football that the title holders produced on this occasion was very sweet indeed.

Great credit to manager Mickey Graham for his excellent work in blending together such a talented team and the always dangerous Rian Brady had a couple of other goal chances.

Rian had a close range shot saved by Abbeylara keeper Gavin Kelly in the 37th minute and soon after he shot wide with the goals at his mercy.

Mullinalaghta eventually got their first score in the second half when the lively Jayson Matthews was on target from a tight angle in the 40th minute and another point quickly followed from Rian Brady before the penalty miss by James McGivney.

James had another goal attempt blocked by Gavin Kelly in the 48th minute, a fine save by the Abbeylara netminder, and St Columba’s continued to run riot in clocking up another 1-4 from there until the finish.

A point from Jayson Matthews was followed by a goal from Shane Mulligan and substitute Michael Cunningham also made his mark with a couple of scores to his credit late in the game.

The other point came from a David McGivney free and when the celebrations are all over the Mullinalaghta men can start preparing for the Leinster Club Championship quarter-final clash away to Offaly kings Rhode or the Wicklow champions Rathnew or St Patrick's on Sunday November 11.