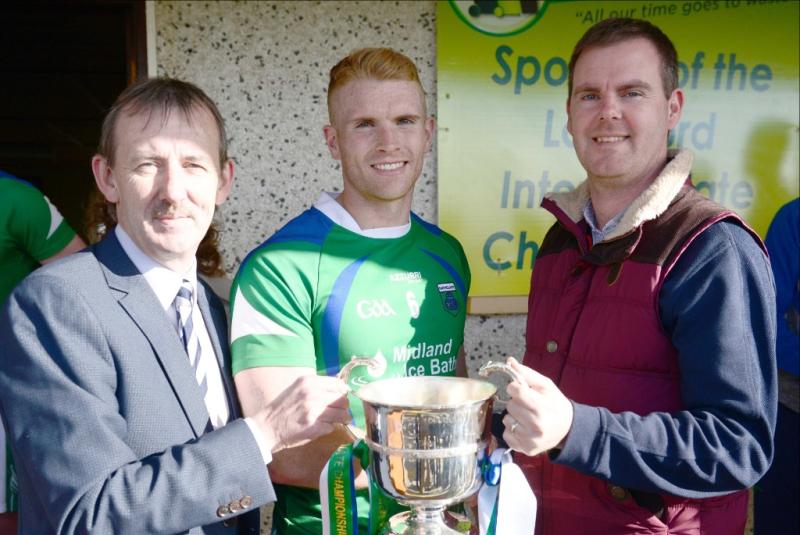 It took a second final replay to eventually determine the destination of the Gerry Hennessy Cup this year and it was Rathcline who took the Intermediate Championship title in a real thriller at Glennon Brothers Pearse Park on Sunday last.

When Ardagh/Moydow defender Gerard Farrell surged forward to fire the ball over the bar in the 55th minute the sides were deadlocked at 1-13 apiece in a pulsating game and another draw was looking the likely outcome.

But moments later the decisive score that finally settled this epic encounter materialised when Rathcline wing back Kian Gilmore set off on a penetrating run before playing the perfect pass into the path of Niall Keane.

Keane had nothing but a goal on his mind and he made no mistake in shooting past the opposing keeper Darren Farrell and while Ardagh/Moydow tried very hard to salvage the situation they failed to register another score.

A goal attempt from Paddy Ganley in the 60th minute was deflected wide and after Finn Hartmann dropped a ‘45’ into the square in the hope that the amalgamation might snatch the equalising score it was not to be as the Rathcline defence stood firm.

Ardagh/Moydow were reduced to 14 players when Brian Farrell was sent-off in the fifth minute of stoppage time and Shane Kenny then pointed a well struck ‘45’ to make absolutely certain of another Rathcline success in the Intermediate grade, their fifth title in total.

In retaining the Gerry Hennessy Cup and winning the second tier championship for the third time in the space of four years, the Lanesboro club make their return to the senior grade next season with a number of promising young players in their squad.

Two of those, Iarla O’Sullivan and Kian Gilmore, were particularly impressive in the highly entertaining second replay on Sunday last with the man of the award winner O’Sullivan scoring three crucial points in the third quarter of the cracking contest.

The dangerman O’Sullivan also had three goal chances in playing a major role in the county title triumph and Rathcline can now look forward to the Leinster Intermediate Club quarter-final away to the Wexford champions Gorey or Mullinavat (Kilkenny) on Saturday November 10.

Spare a thought for the gallant losers Ardagh/Moydow who were badly hit by injuries during this championship campaign with Daryl Carrigy out of action along with Tommy Powell while Conor Carroll (appendix) was unable to feature in the final part of the marathon title decider.

Fergal Keenan was forced to retire injured after only four minutes on Sunday last but in came Finn Hartmann to produce a terrific display that saw him score five points from play, four in the first half.

A brace of scores apiece from Killian Farrell, Paddy Ganley and Shane Henry (one free) left Ardagh/Moydow leading by 0-10 to 0-8 at the break but they had a few lucky escapes as Rathcline somehow failed to score a goal in the first half.

Three of their eight points came from Liam Connerton (two frees) with Kevin Chapman (2), Shane Kenny and James Hanley (2) also on target, although Hanley should have found the back of the net when he blasted the ball over the bar from close range in the 28th minute.

Immediately on the changeover Iarla O’Sullivan had a point-blank goal attempt well saved by the Ardagh/Moydow netminder Darren Farrell before they got back on level terms with scores from O’Sullivan and Oran Kenny, the latter well placed to find the net in shooting over the bar.

The amalgamation then regained the lead when Finn Hartmann fired over his fifth point when he could have found the net but his side fell behind when Rathcline substitute Aaron Madden scored a crucial goal in the 41st minute, the end result of a brilliant  move.

Two points in quick succession from Iarla O’Sullivan left the title holders in what appeared to be a fairly comfortable 1-12 to 0-11 lead midway through the second half but Ardagh/Moydow got right back into contention when great work by Killian Farrell created the opening for Rory Sullivan to plant the ball in the roof of the net in the 49th minute.

The titanic battle continued with a point apiece from frees converted by Shane Henry and Aaron Madden and while Gerard Farrell landed the levelling score for Ardagh/Moydow, a second goal for Rathcline from Niall Keane in the 56th minute swung the issue in favour of Liam Tully’s more energetic team.