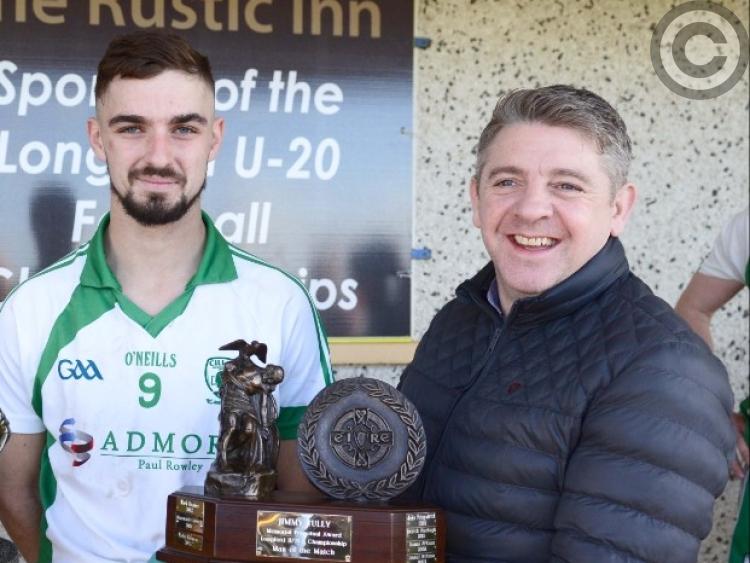 Killoe player Shane Thompson receiving the man of the match award (Jimmy Tully trophy) in the U-20 Championship Final from Edward McGoey of the sponsors The Rustic Inn. Photo: Declan Gilmore

A cohesive second half performance was sufficient to see Emmet Óg Killoe crowned the inaugural Rustic Inn U-20 Football Championship winners as they convincingly overcame Mostrim/Sean Connolly’s by 2-11 to 1-9 in the opening match of the triple bill at Glennon Brothers Pearse Park on Sunday last.

Killoe captain Niall Farrelly led by example from centre-half-back and there were great scenes of jubilation as he accepted the Kevin Hughes Cup from John Coyle and Co Board Chairperson Eamon Reilly, while the Jimmy Tully Trophy for Player of the Match went to Shane Thompson, who created both Killoe goals, and was involved in most of their positive play.

Mostrim/Sean Connolly’s, managed by Gerry Lynn and Colin Dalton, got off to a bright start but by half-time Kevin Dooner’s Killoe side had hauled them back into contention and the sides were level at the interval, 1-4 apiece.

A third quarter score burst that yielded 1-4 without reply proved decisive for Killoe and while their opponents continued to battle gamely, they weren’t able to get close to mount a serious threat.

Killoe held all the aces on the day, with Farrelly, Brian Harte, Thompson, Philip Kiernan, David McCarthy and Cian Dooner leading their charge to a historic U-20 title triumph.

Underdogs Mostrim/ Sean Connolly’s began intently and inside eleven minutes they enjoyed a 1-2 to 0-1 advantage. Sean Kenny and Padraic Joyce dispatched the points before Joyce, after being fouled by James Moran, cooly slotted a penalty to the onion bag. Killoe’s only riposte during this spell was a Eunan Finneran point.

Cian Dooner blasted a 13th minute goal opportunity wide and with Philip Kiernan and Shane Thompson dictating midfield, Killoe enjoyed lots of possession and by the 26th minute they were 1-3 to 1-2 ahead. Dooner converted a brace of frees and David McCarthy side-footed a low shot to the net after Thompson’s high delivery wasn’t dealt with.

Mostrim/Sean Connolly’s regained the lead with well taken points by Joyce and Evan Murphy, and in first half additional time, Killoe’s Jake Donnelly fired over the equaliser, 1-4 to 1-4 - the third and final occasion the sides were deadlocked.

Killoe, winners of the 2017 and 2018 minor championship titles, effectively wrapped up the contest in the opening ten minutes of the second half when they registered 1-4 without reply. Dooner chipped in with a brace of frees, with half forwards Shane McManus and Eunan Finneran also on target. And then, in the 40th minute, after decent work by Thompson, the lethal McCarthy cracked home his second goal, 2-8 to 1-4.

Tommy Doyle replied with a Mostrim/Sean Connolly’s point and the amalgamated outfit were somewhat unlucky in the 42nd minute as a decent Daire Duggan strike was well saved by Brian Carr. Shane McManus and Joyce traded successful frees at either end, 2-9 to 1-6.

Dooner kicked his first point from play in the 48th minute and Mostrim/Sean Connolly’s replied with two points at the other end per Daire Duggan and the impressive Joyce, 2-10 to 1-8. Dooner and Joyce traded points before the end and even in added time Mostrim/ Sean Connolly’s were denied in their bid for a consolation goal.