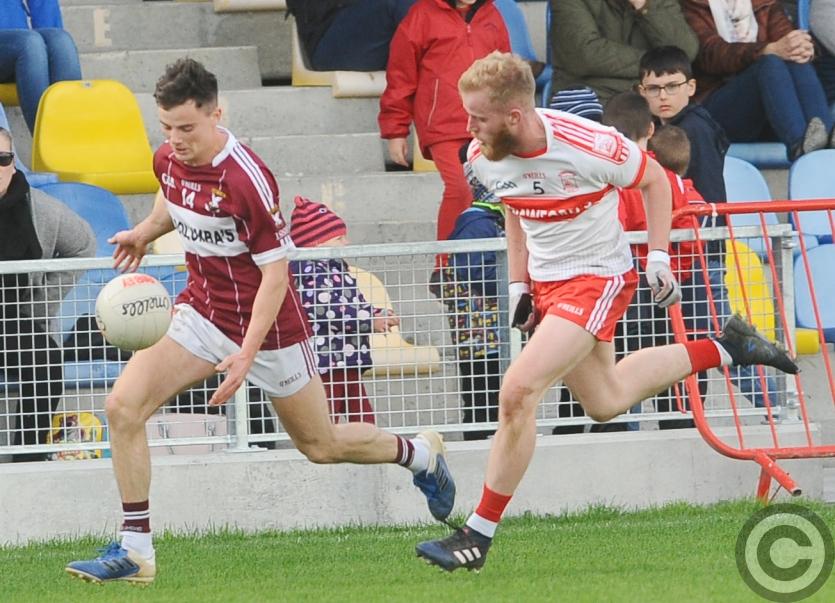 Rian Brady on the attack for Mullinalaghta with Abbeylara defender Russell Brady in pursuit. Action from the County SFC final replay on Sunday. Photo: Declan Gilmore

St Columba’s produced their best performance this year to retain the Connolly Cup and thus join the distinguished list of clubs who have achieved a three-in-a-row of county SFC titles - a magnificent feat.

Despite conceding a goal with just over two minutes gone in the game when Colm P Smyth got Abbeylara off to a dream start with a cracking goal, Mullinalaghta gradually got on top and ended up in a comfortable 1-8 to 1-1 lead at the break.

A brilliant move yielded the goal from Rian Brady in first half stoppage time and this proved to be a shattering blow from which Abbeylara never recovered.

While Robbie Smyth landed a well struck point from play with five minutes gone in the second half, his side failed to register another score during the remainder of the match whereas St Columba’s added another 1-6 to their most emphatic tally.

Captain Shane Mulligan scored the goal in the 54th minute to inflict even more misery on poor Abbeylara who have now suffered the bitter disappointment of losing the county title decider for the fourth year in succession.

Mullinalaghta were so much in control that they could afford the luxury of missing a penalty when James McGivney drove his kick high against the upright in the 46th minute.

While the impressive David McGivney collected the prestigious man of the match award it was a tremendous team display by the north Longford club who won by the wide margin of 15 points.