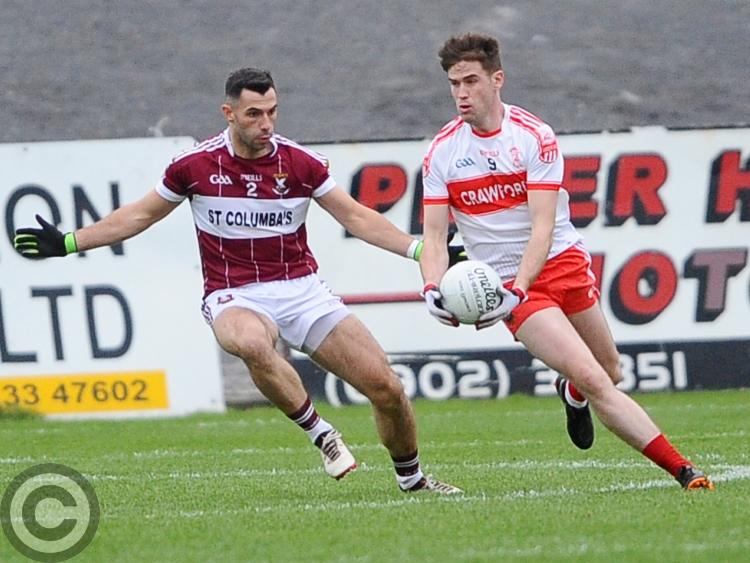 Barry McKiernan on the attack for Abbeylara in facing the challenge of Mullinalaghta St Columba's defender Simon Cadam. Action from the SFC Final on Sunday last. Photo: Declan Gilmore

With another defeat in the county final looming when they fell 0-6 to 0-4 adrift midway through the second half and playing against the stiff wind, resilient Abbeylara showed a lot of character in battling back to earn a draw against Mullinalaghta.

The blustery conditions caused havoc in a very scrappy game littered with yellow and black cards and a red right at the end of the title decider at Glennon Brothers Pearse Park on Sunday last as the senior football championship final ended all square for the first time since 2012.

Despite the setback of losing James McGivney who was dismissed for a black card offence in first half stoppage time, St Columba’s still looked on course for a three-in-a-row of county titles when Gary Rogers landed a well struck ‘45’ in the 46th minute but the reigning champions failed to register another score as they shot seven wides on the changeover.

Abbeylara, with their captain Robbie Smyth back in action after a lengthy injury absence after coming on in the closing stages of the first half, were very determined not to suffer the bitter disappointment of another final failure.

The introduction of experienced substitute Padraig Berry made an immediate impact in the attack and the gap was closed to the minimum of margins when Jason Kelly fired over a fine point in the 49th minute.

And soon after (51st minute), the impressive Nigel Rabbitte shot over the bar for his fourth score to level matters and that was the way it finished.

A draw was probably the fairest outcome to a poor match and in the hope that more favourable weather conditions will grace the replay on Sunday next (throw-in 3.45pm) the supporters will be expecting a much better contest.

Abbeylara ended the game with 14 players when defender Cormac Smyth was sent-off,  receiving a straight red card with time almost up after tempers flared in a brief fracas  and thus he will be suspended for the replay.

An attendance in the region of 3,000 plus braved a cold and windy day to witness the neighbouring rivals clash in the county SFC final for the third year in succession and it developed into a real war of attrition that was hard to watch.

A further score apiece from frees were then exchanged between Nigel Rabbitte and Rian Brady before John Keegan finished off a well worked move for the third St Columba’s point in the 18th minute.

Conor Berry, switched from midfield into full-forward, then created the chance for Nigel Rabbitte to land the equalising score for Abbeylara in the 25th minute.

Abbeylara were now showing the greater urgency and moments later they took the lead with a very good score from Rabbitte to hold a slender 0-4 to 0-3 lead at the break.

It could have been even better for the underdogs when a glorious goal chance fell to Cian Brady whose point-blank shot was deflected wide after he capitalised on a mistake by a Mullinalaghta player in letting the ball slip from his grasp in first half stoppage time.

Eight minutes were gone in the second half before St Columba’s got back on level terms with a cracking long range point from David McGivney and they hit the front in the 42nd minute when Rian Brady fired over a free.

McGivney was playing a prominent role for Mullinalaghta and he was denied a goal when his close range shot was blocked down by Abbeylara defender Cormac Smyth in the 45th minute.

Gary Rogers slotted over the resulting ‘45’ and St Columba’s appeared to be on their way to victory but Abbeylara came storming back with points from Jason Kelly and Nigel Rabbitte to earn their side a second chance.

Even the double setback of losing defenders Michael McHugh and PJ Masterson to black cards in the closing stages failed to rattle Abbeylara who might have snatched a surprise win  but for Barry McKiernan shooting wide in the 60th minute.

Having said that, Mullinalaghta suffered the misfortune of hitting the upright twice through Gary Rogers and Shane Mulligan in the very tense finish and will be the favourites to succeed at the second attempt this Sunday on the basis that they are the stronger side.