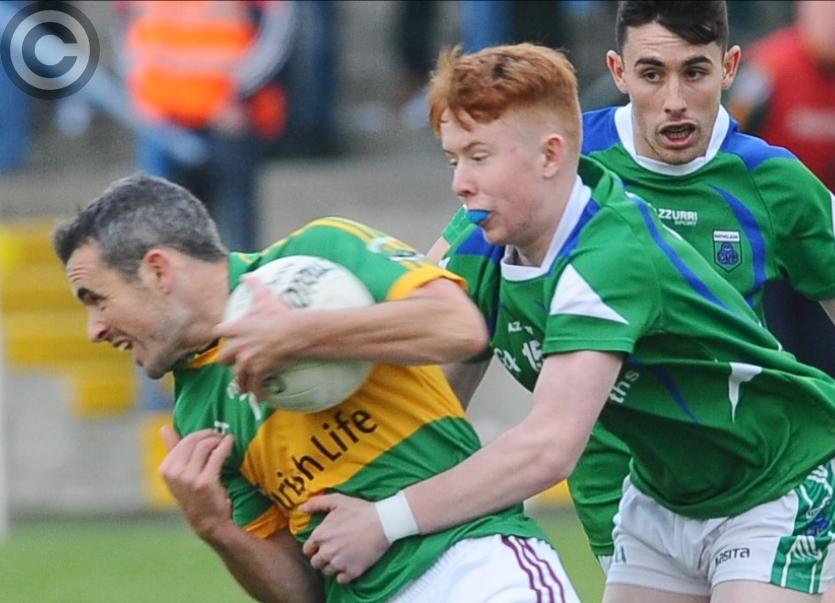 Gerard Farrell on the ball for Ardagh/Moydow in this tussle with Rathcline opponent Oran Kenny. Action from the recent IFC final replay at Glennon Brothers Pearse Park. Photo: Declan Gilmore

For only the second time in the history of Longford GAA a third game is required to determine the outcome of a county football championship final.

The Ardagh/Moydow amalgamation will battle it out against Rathcline in the second replay of the Intermediate title epic at Glennon Brothers Pearse Park this Sunday (1.45pm) in the curtain-raiser to the Abbeylara v Mullinalaghta SFC final replay (3.45pm).

There is nothing separating the second tier sides and in the aftermath of the dramatic finish in the previous two games it is extremely difficult to predict who will eventually collect the Hennessy Cup.

Key Ardagh/Moydow forward Killian Farrell, troubled by a recurring ankle injury that prevented him from starting in the marathon final, might be in a better place now to feature on the first fifteen and that will be a big boost if it materialises.

Ardagh were also part of the last county final that required a second replay and that was the clash against neighbouring rivals Mostrim in the senior football championship title decider back in 1985.

Edgeworthstown eventually emerged victorious by 1-5 to 0-6 and in action for St Patrick’s 33 years ago were brothers James and Joe Farrell whose sons Gerard and Killian are members of the current Ardagh/Moydow squad.

Another link between the past and present is James Keegan, a member of the Ardagh panel in 1985, and his son John will line-out in the defence for the amalgamation in their quest for Intermediate glory on Sunday.

Killoe fancied to capture first ever U-20 title

It’s a packed programme at Glennon Brothers Pearse Park this Sunday with the first ever under 20 Championship Final (throw-in 12 noon) starting the action in no less than three county football title deciders.

While the Mostrim/Sean Connolly’s amalgamation have done really well to get this far they will probably have to settle for second best against a strong Killoe side.

On the basis of their back-to-back Minor Championship titles, it is hard to see anything other than a win for Emmet Og and they are expected to come out on top in their quest for further success.