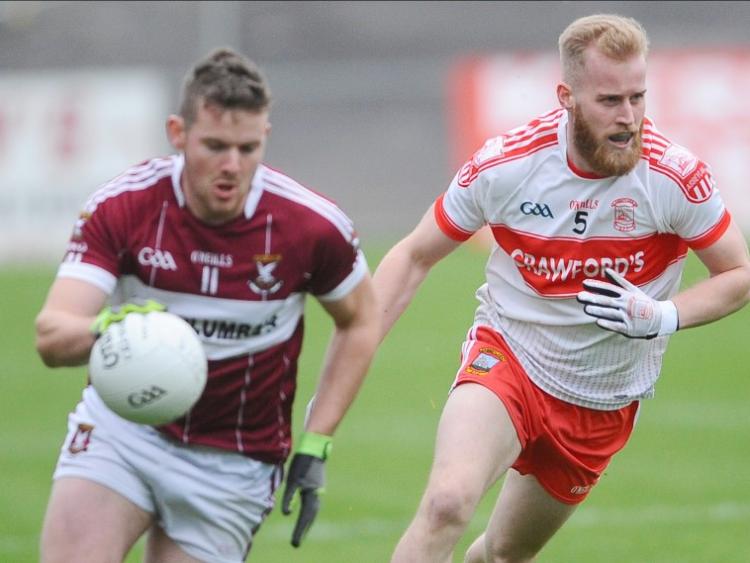 James McGivney on the attack for Mullinalaghta with Abbeylara opponent Russell Brady in pursuit. Action from the SFC final at Glennon Brothers Pearse Park on Sunday. Photo: Declan Gilmore

With another defeat in the county final looming when they fell 0-6 to 0-4 adrift midway through the second half and playing against the stiff wind, resilient Abbeylara showed a lot of character in battling back to earn a draw against Mullinalaghta.

The blustery conditions caused havoc in a very scrappy game littered with yellow and black cards and a red right at the end of the title decider at Glennon Brothers Pearse Park on Sunday as the senior football championship final ended all square for the first time since 2012.

Despite the setback of losing James McGivney who was dismissed for a black card offence in first half stoppage time, St Columba’s still looked on course for a three-in-a-row of county titles when Gary Rogers landed a well struck ‘45’ in the 46th minute but the reigning champions failed to register another score.

Abbeylara, with their captain Robbie Smyth back in action after a lengthy injury absence, were very determined not to suffer the bitter disappointment of another final failure,

The gap was closed to the minimum of margins when Jason Kelly fired over a fine point in the 49th minute and soon after (51st minute) Nigel Rabbitte registered his fourth score to level matters and that was the way it finished.

A draw was probably the fairest outcome to a poor match and the replay take place on Sunday next, throw-in 3.45pm, with the Intermediate football championship final second replay, Ardagh/Moydow v Rathcline, the curtain-raiser (1.45pm).

Abbeylara ended the game with 14 players when defender Cormac Smyth was sent-off after receiving a straight red card with time almost up and thus will be suspended for the replay.