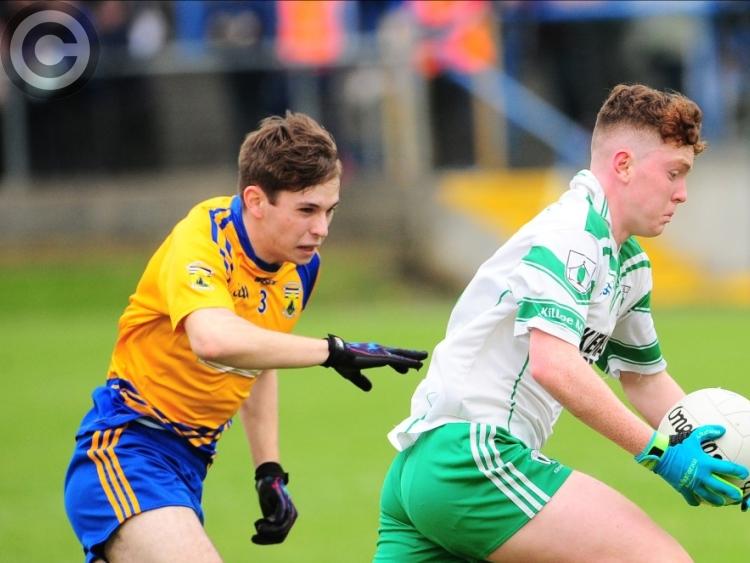 For the second year in succession Killoe Og will take on Carrick Sarsfields/St Dominic's Kenagh in the Minor Football Championship Final at Glennon Brothers Pearse Park this Sunday, 2pm.

A close encounter is expected in a most interesting curtain-raiser to the Abbeylara v Mullinalaghta senior decider with the amalgamation seeking revenge for their slender one point defeat (0-11 to 0-10) in last year’s U-18 title showdown.

A lot of the players who lined-out in the 2017 minor final will feature in the rematch, most notably the deadly accurate Killoe forward Cian Dooner who fired over eight points (four frees) in producing a man of the match performance 12 months ago.

Dooner is one of six Killoe footballers who were in action for the Longford U-17s in their excellent win over Dublin in the Leinster Minor Shield Final during the summer with James Moran, Jonathan Borland, Euan Finneran, Darren Moffett and Reece Leonard also gracing the Pearse Park pitch on that occasion.

And when you add the names of Conor Gilna, Emmet Igoe, Evan Farrelly, Niall Finneran, Jake Donnelly and Paul Brady to that list, all of whom featured in the county minor title triumph last year, the indications are that Killoe will prove difficult to dethrone.

The reigning champions scored a convincing 3-9 to 1-9 win over the Colmcille/Dromard amalgamation in the recent semi-final and most of the damage was done in the first half as Killoe established a commanding 2-7 to 0-3 lead at the break.

Cian Dooner clocked up the impressive total of 1-6 (four frees) in that game  and while he is a serious threat it must be said that the Carrick Sarsfields/Kenagh outfit are a formidable force when they click into top gear.

That was the case for most of the semi-final clash against Longford Slashers a couple of weeks ago as the rampant amalgamation led by the wide margin of 11 points in the early stages of the second half but then faded badly in almost letting victory slip from their grasp.

Slashers launched a remarkable comeback to score four goals and only lost by a solitary point in the exciting finish with last year’s beaten finalists fortunate to hold out for a narrow win.

Having said that, the amalgamation are a talented outfit with Carrickedmond lad  Eoghan McCormack the captain of the Longford U-17s who won the Leinster Minor Shield while Keelin McGann, Peter Dempsey, Adam Quinn and Patrick Murray were also members of that successful county team.

Aidan McGuire, Dylan Horkan, Jack Dempsey, Shay Carberry and Patrick Cahill, all of whom played in last year’s county minor final, will be back in action at Pearse Park on Sunday next in the hope of making amends but a notable absentee is the unavailable Cian Nolan.

There would appear to be very little separating the sides and it is difficult to predict the eventual outcome in a game that could go either way.

Killoe Og are probably the better-balanced team and might be good enough to retain the Harte Cup on the basis that they beat Carrick Sarsfields/Kenagh by five points in the group stage of the 2018 minor championship.