Longford IFC Final Replay: Rathcline can overcome Ardagh/Moydow at the second attempt in the battle for the Hennessy Cup 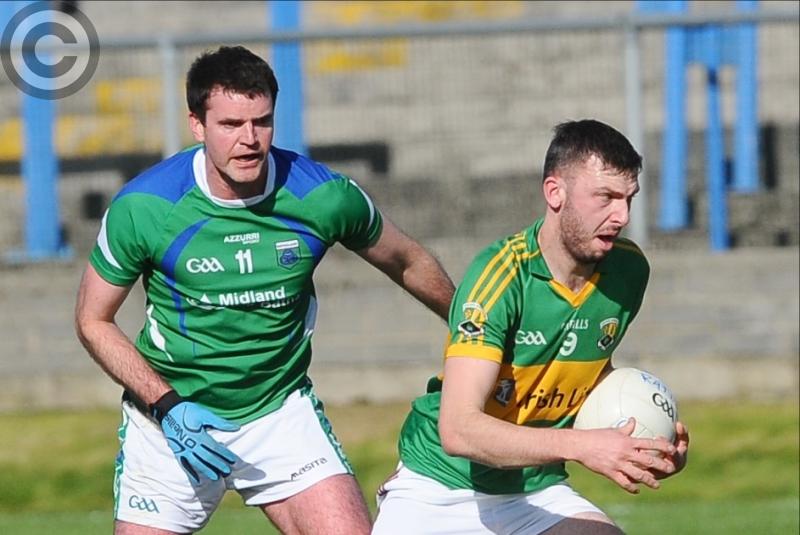 Edward Powell on the ball for Ardagh/Moydow ahead of Rathcline opponent Derek Casserly. Action from the IFC Final which ended in a draw on Sunday last. Photo: Declan Gilmore

Rathcline let victory slip from their grasp and almost ended up losing in a dramatic finish to the Intermediate Football Championship Final which eventually ended in a draw at Glennon Brothers Pearse Park on Sunday last.

Ardagh/Moydow, starting without injured key forwards Daryl Carrigy and Killian Farrell, looked dead and buried when Iarla O’Sullivan shot over the bar in the 57th minute to leave the Lanesboro lads  in what appeared to be a comfortable 1-10 to 0-9 lead.

But a brace of points in quick succession from the impressive Paddy Ganley (who clocked up  a total of 0-6) kept the amalgamation in contention and they hit the front in the fourth minute of stoppage time when a Rory Sullivan free ended up in the back of the Rathcline net.

That goal should have been the killer blow for the reigning champions but the game  dragged on until the eighth minute of stoppage time when the equalising point materialised.

A free from Shane Kenny fell short but the ball broke to the alert Iarla O’Sullivan who got the crucial score to leave it all square when the final whistle was blown seconds later and so the sides must meet again in the replay at Pearse Park this Saturday evening, throw-in 5pm.

The absence of Killian Farrell (ankle injury), listed on the programme at full-forward, was a major blow for Ardagh/Moydow who squandered a considerable amount of possession in the early stages of the game watched by an attendance well in excess of the 1,000 mark.

Rathcline, with the aid of the wind, led by 0-3 to 0-1 midway through the first half with their scores coming from Shane Kenny (free) and a brace of excellent efforts from wing back Kian Gilmore while Shane Henry accounted for the opening Ardagh/Moydow score in the 9th minute.

Paddy Ganley converted a free for his first point in the 20th minute but a couple of well-taken scores from Oran Kenny and James Hanley extended the Rathcline advantage, 0-5 to 0-2.

Paddy Keenan then had a goal attempt deflected out for a ‘45’ before Ardagh/Moydow managed to close the gap to the minimum of margins with a point apiece from Shane Henry (free) and Ganley (a very good strike).

Rathcline struck for their goal in the 26th minute when a centre from Shane Kenny hopped over the head of unfortunate opposing defender Tommy Powell and into the path of James Hanley who played the perfect pass to Oran Kenny and the promising young player made no mistake in shooting to the net from close range.

Scores were then exchanged between Paddy Ganley (another fine effort) and Liam Connerton (free) as Rathcline ended up 1-6 to 0-5 ahead at the break and missed a couple of good chances to increase their lead in the early stages of the second half.

Back came Ardagh/Moydow, with the wind now in their favour, with a brace of scores through Shane Henry (free) and Frank Galvin and converted frees followed from Liam Connerton and Paddy Ganley.

With the powerful Shane Donohoe proving to be a real driving force at centre-half-back, Rathcline were the better team for most of the second half and got their next score in the 50th minute when substitute Aaron Madden fired over a free.

Ardagh/Moydow replied with a cracking point from full-back Niall Keenan, who had surged forward to join the attack, but it was not looking good for Declan Rowley’s side when Rathcline hit back to register two more scores through Liam Connerton (free) and Iarla O’Sullivan.

But the spirited amalgamation, who brought on Killian Farrell midway through the second half in a bid to improve matters, showed a lot of character to score 1-2 in the extended exciting closing stages and appeared to have snatched the Gerry Hennessy Cup.

Due to a few stoppages late in the game, Rathcline still had time to salvage the situation.

Much to their great relief a last gasp point from Iarla O’Sullivan  saved the shannonsiders from the heartbreak of defeat after they enjoyed the greater share of possession during the game.

In the final analysis, Rathcline will feel that they should have won the Intermediate title on Sunday last and the loss of the injured Oran Kenny early on in the second half was a significant setback.

It could be ever bit as close again in the eagerly awaited replay on Saturday but the indications are that Ardagh/Moydow might have to settle for second best.