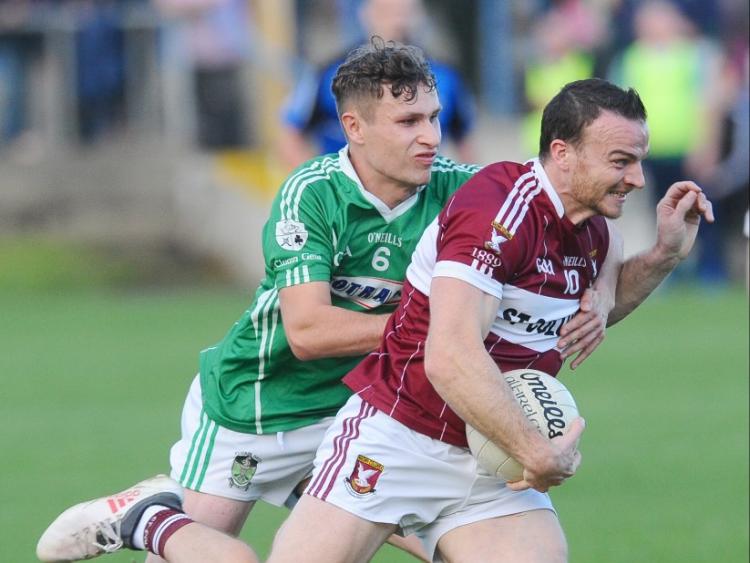 Donal McElligott on the ball for Mullinalaghta in this tussle with Clonguish opponent Chris Gordon. Action from the SFC semi-final on Saturday evening. Photo: Declan Gilmore

Mullinalaghta moved a step closer to a magnificent three-in-a-row of county senior football championship titles when they overcame the gritty challenge of Clonguish in the semi-final at Glennon Brothers Pearse Park on Saturday evening.

St Columba’s (who led by 0-7 to 0-3 at the break) looked in a bit of bother when Conor Shields fired home a cracking goal with 12 minutes gone in the second half to leave Clonguish leading by 1-6 to 0-7 but they failed to register another score during the remainder of the match.

Showing their champions class, Mullinalaghta did not panic and stepped up another couple of gears to shoot five wonderful points between the 44th and 54th minutes.

A brace in quick succession from Jayson Matthews were followed by a score from Shane Mulligan to put the men in maroon back in front and David McGivney and Donal McElligott were also on target as Mickey Graham’s side reached yet another county final.

Providing the opposition in the Connolly Cup decider for the third year in succession will be neighbouring rivals Abbeylara with Sunday 7 October the date for the big match.

Subs:- Conor McElligott for A McElligott (43 mins); Michael Cunningham for B Fox (53 mins).