Longford IFC Final: Rathcline might just have the edge over Ardagh/Moydow in the Intermediate title decider 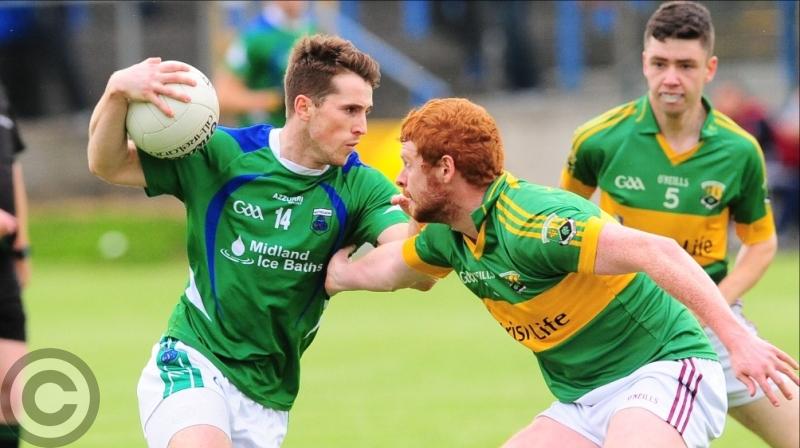 Liam Connerton on the attack for Rathcline in this tussle with Ardagh/Moydow defender Niall Keenan. Action from last year's IFC semi-final which was won by Rathcline. Photo: Declan Gilmore

Few can argue with the fact that the two best teams in this year’s Intermediate Football Championship have made it through to the title decider with a cracking contest in prospect at Glennon Brothers Pearse Park this Sunday, throw-in 4pm.

Reigning champions Rathcline looked impressive in their comfortable win over Fr Manning Gaels and while the wide margin of 11 points separated the sides in the finish the absence of the injured county player Pauric Gill was a serious blow for the Drumlish/Ballinamuck team.

Ardagh/Moydow, on the other hand, were made to work harder in the other semi-final after conceding a goal in the early stages of the game but they eventually asserted their superiority over a brave Ballymore outfit.

The amalgamation emerged victorious by five points but suffered another injury setback when key attacker Killian Farrell was forced to retire with six minutes gone in the second half.

Prior to his departure the lethal Farrell had fired over five points (all from play) before he sustained ankle damage and the Ardagh/Moydow supporters will obviously be hoping that Killian is fully fit to feature in the county final.

Definitely ruled out is Daryl Carrigy who missed the match against Ballymore and he is facing a lengthy absence on his recovery from a serious knee injury.

On a positive note the Ardagh/Moydow manager Declan Rowley was able to start Paddy Keenan in the semi-final on his return from injury while the performance of Rory Sullivan, in particular, was a very pleasing factor.

Apart from orchestrating the attack in his influential role at centre-half-forward, Sullivan shot a total of five points (two frees) while substitute Paddy Ganley certainly made his presence felt up front when he replaced Killian Farrell.

The vastly experienced Ganley scored a couple of crucial points and Ardagh/Moydow are a well balanced team with Niall Keenan a commanding figure at full-back while Gerard Farrell is playing exceptionally well in the half-back-line.

But the general opinion is that the amalgamation will probably be hard pressed to beat Rathcline in the battle for the Gerry Hennessy Cup without Daryl Carrigy who was a member of the county senior squad this season.

Having said that, Rathcline were minus the injured Liam Connerton when they conquered Sean Connolly’s in last year’s Intermediate final so Ardagh/Moydow will believe that they are still good enough to take the title.

Liam Tully from Kilbride in Co Roscommon is the new manager of the Lanesboro club who are attempting to capture the Hennessy Cup for the third time in the space of four years and the current squad are growing in confidence.

The emergence of talented young players in Iarla O’Sullivan, Kian Gilmore and Oran Kenny has added a lot of vitality to the team while providing the experience in a sharp attack are Liam Connerton, Derek Casserly and James Hanley.

All six forwards got their names on the scoresheet against Fr Manning Gaels which suggests that the Ardagh/Moydow defence are facing a difficult task in the big match on Sunday.

Shane Kenny is expected to make a big impact at midfield, alongside Michael Morrissey, and this duo will be hard stopped in the intriguing tussle against the probable opposing pairing of Eddie Powell and Frank Galvin.  Shane Donohoe and Kevin Sorohan are the main men in the Rathcline defence who might experience a few problems dealing with the threat of the slick Ardagh/Moydow attack who registered 17 scores in the win over Ballymore.

With Rathcline clocking up the impressive total of 2-14 in blowing the Gaels away in the semi-final a highly entertaining encounter could be in store with Ardagh/Moydow hoping to gain revenge for their disappointing 3-12 to 0-13 defeat at the penultimate stage last year.

Rathcline were only a point ahead (1-8 to 0-10) entering the final quarter and suffered a severe setback when Liam Connerton was stretchered off after sustaining a serious knee injury in the 47th minute but they produced a very strong finish to win by the comfortable margin of eight points.

It is interesting to note that just five members of the Ardagh/Moydow team who started in the semi-final clash against Rathcline last season featured on the first fifteen against Ballymore a couple of weeks ago.

The title holders are also showing a number of changes to their team this year with the introduction of younger players in a fresh approach and the indications are that Rathcline might just have the edge over Ardagh/Moydow in the eagerly awaited Intermediate final.