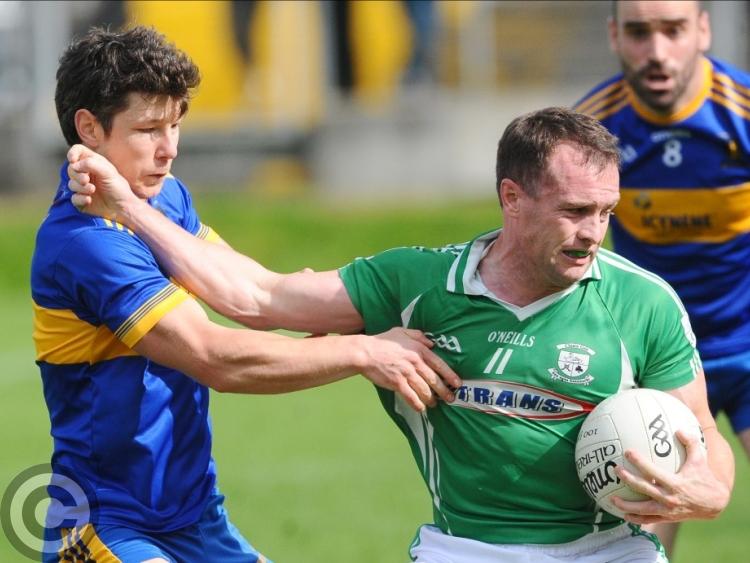 David Barden on the ball for Clonguish in this tussle with Dromard opponent Pauric Martin. Action from the SFC quarter-final replay on Sunday last. Photo: Declan Gilmore

For the second year in succession Clonguish and Mullinalaghta will meet in the Senior Football Championship semi-final to determine who moves on to meet Abbeylara in the Connolly Cup decider on October 7.

The intriguing rematch is set for Glennon Brothers Pearse Park this Saturday evening (throw-in 5.30pm) and Clonguish will be quietly confident of gaining revenge against the title holders St Columba’s after storming back to beat Dromard in the quarter-final replay last weekend.

The clubs also clashed at the penultimate stage in 2014 with just a solitary point separating the sides as Mullinalaghta came out on top to reach the county final. In charge of Clonguish back then was none other than the current St Columba’s manager Mickey Graham.

It was Graham who guided Clonguish to their last appearance in the senior championship final in 2011, losing to Longford Slashers by the minimum of margins.

Current Clonguish coach Dermot McCabe from Gowna will be linking up with Graham next season as part of the Cavan senior football management team.

At the moment the complete focus for the Cavan men is the quest to qualify for the Longford SFC final and it must be said that Clonguish were extremely unlucky not to have beaten Mullinalaghta at this same stage last season.

A last gasp point from a free converted by Jayson Matthews earned St Columba’s a very fortunate draw but they made no mistake at the second attempt to register a comprehensive 0-15 to 0-8 win.

Having said that, the absence of the unavailable Paul Barden for the replay in 2017 was a major blow for Clonguish who were also forced to field without injured duo Ronan Sweeney and Kevin Burke.

But key forward Ciaran Williams is currently on the casualty list (a serious loss) and the indications are that the Newtownforbes side, playing their third game in the space of 13 days, will be hard pressed in their bid to master Mullinalaghta.

Peter Hanley produced a powerful display at centrefield in the second half against Dromard on Sunday last as Clonguish showed a lot of character in coming back from four points down at one stage to win by  five points in the finish.

Mullinalaghta may have struggled somewhat in their laboured 1-11 to 0-9 victory over Mostrim in the quarter-final but they were always able to move up another gear when it was required.