Longford SFC: Mullinalaghta to march on while Dromard experience a vital factor 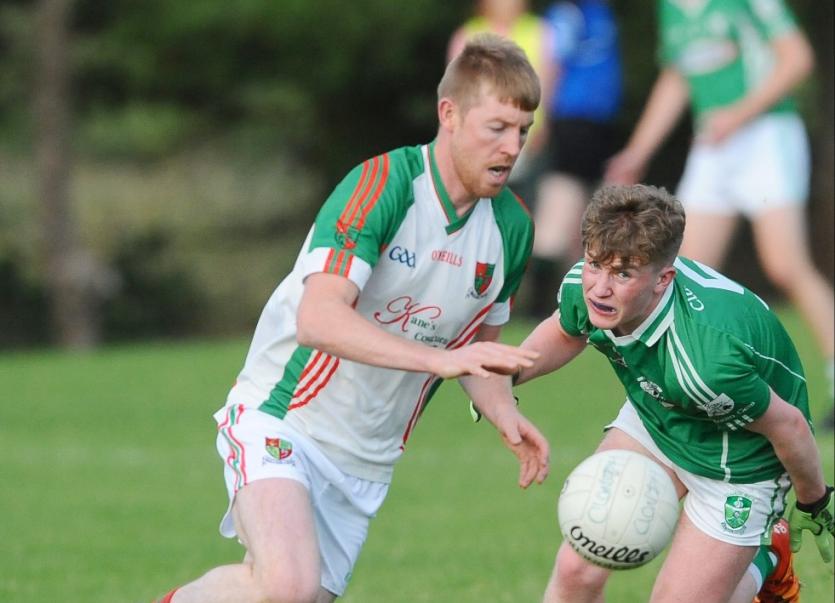 Seamus Hannon on the ball for Mostrim ahead of Clonguish opponent Francie Molloy. Action from the SFC Group 1 game at the Higginstown grounds. Photo: Declan Gilmore

The remaining two quarter-finals in the Peter Hanley Motors sponsored Senior Football Championship are down for decision this weekend at Glennon Brothers Pearse Park.

First into action on Saturday evening (throw-in 6.30pm) are the reigning champions Mullinalaghta (backboned by a lot of quality players) and it will be a major surprise if they should ever happen to slip up against Mostrim.

Having said that, St Columba’s were very fortunate to survive in the drawn encounter against Killoe at this same stage last year and manager Mickey Graham (the new Cavan senior supremo) will be warning his side against complacency.

Edgeworthstown have proven in the past that they are capable of springing a surprise against the stronger sides and played exceptionally well to reach the semi-finals last year.

The recent win over Abbeylara in the final group fixture will have given Jack Lynn’s charges a considerable boost and Mostrim’s main man is Brian Farrell who is well capable of making a big impact.

But there appears to be no stopping mighty Mullinalaghta, recent winners of the Division 1 league in adding another title to their impressive list of honours, and they are strongly fancied to march on in their quest to complete a championship three-in-a-row which will be a magnificent feat if it materialises.

Predicting the outcome of the last quarter-final on Sunday evening (6.30pm) is a difficult task but Dromard’s vast experience is viewed as a vital factor in their bid to beat familiar rivals Clonguish.

The value of experience certainly stood to Sean Hagan’s seasoned side when they got the better of already qualified Killoe by the minimum of margins (1-10 to 0-12) in the remaining group fixture to make sure of their place in the last eight.

Francis McGee scored the decisive goal in the early stages of the game and he is very much the dangerman in the Dromard attack.

Current county players Diarmuid Masterson and Ronan McEntire will also be expected to make their presence felt against a generally young Clonguish side as the club endeavour to build on their U-21 ‘A’ championship success last year.

Coming through the group stage of the 2018 championship campaign unbeaten in the three games will certainly have pleased the Clonguish coach Dermot McCabe but the absence of injured attacker Ciaran Williams is a serious setback.

Resolute defender Ronan Sweeney is another casualty, having been ruled out of action for quite some time, while Paul Barden has yet to make an appearance in this year’s Connolly Cup.

One would expect former Longford star Barden to feature at some stage of the eagerly awaited clash against Dromard in a repeat of last year’s quarter-final which was won by Clonguish in controversial circumstances.

A close encounter looks in prospect but after showing their survival instincts to get the result they required against Killoe in the previous round a hesitant vote is given to Dromard to set up a probable semi-final showdown against Mullinalaghta.