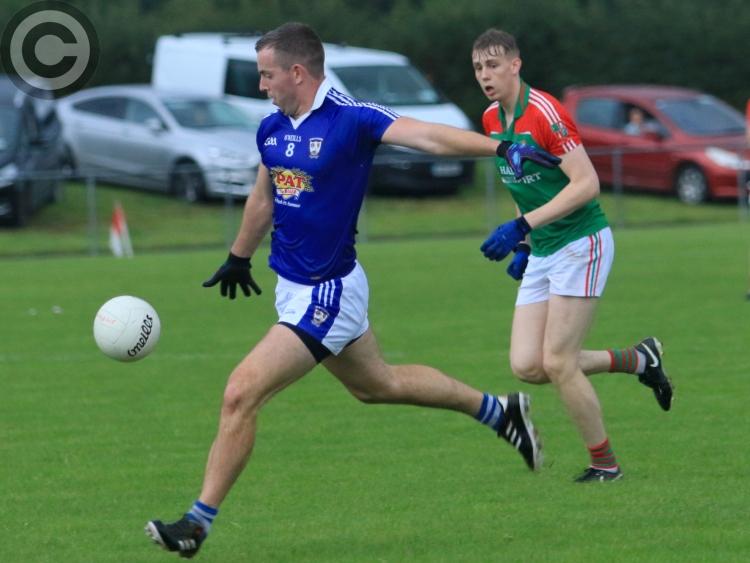 Charlie Martin pictured in action for Granard against Colmcille in the group stage of the senior football championship. Photo: Syl Healy

With the notable exception of the so competitive Group 3 which saw Slashers miss out on a place in the quarter-finals for the second year in succession, the league stage of the Senior Football Championship created little entertainment value with quite a few one-sided games.

The luck of the draw certainly favoured the teams in Group 1 and Group 2 with Ballymahon and Carrickemond also making their exit from the Connolly Cup.

Ballymahon have decided to  withdraw from the relegation play-offs  in stepping down to the Intermediate Championship next year so Carrickedmond and Longford Slashers are safe in the senior grade.

Eight clubs remain in the hunt for the title and while Mullinalaghta St Columba’s are rightly  regarded as the firm favourites to complete a magnificent three-in-a-row, the general opinion is that their main rivals Killoe have a strong chance of reaching the county final in their bid to come through the other half of the draw.

Emmet Og are in action against Abbeylara in the second of the quarter-finals at Glennon Brothers Pearse Park this Saturday evening (throw-in 6.30pm) and are expected to reach the last four even without the injured Larry Moran.

A bigger blow for Abbeylara is the absence of their star forward Robbie Smyth who suffered the misfortune of apparently sustaining knee ligament damage against Mostrim in the final round of the group phase of the championship.

Reports suggest that sharpshooter Smyth will be ruled out of action and this is a massive setback for Abbeylara, the beaten finalists for the past three years.

While you cannot read too much into Colmcille’s emphatic 1-17 to 1-9 win over Granard in the remaining group fixture as both teams had already qualified for the last eight, the indications are that the same result will materialise when the clubs clash again in the other quarter-final at Glennon Brothers Pearse Park on Saturday evening, throw-in 5pm.

Having said that, the return of county midfielder Darren Gallagher will make a big difference for St Mary’s as he was rested for the meaningless exercise  at Lynch Park a couple of weeks ago as was Colmcille ace Barry McKeon.

A much closer encounter is expected in the match that really matters and while Granard will be quietly confident of springing a mild surprise, Colmcille look good enough to reach the last four and a probable meeting with Killoe.