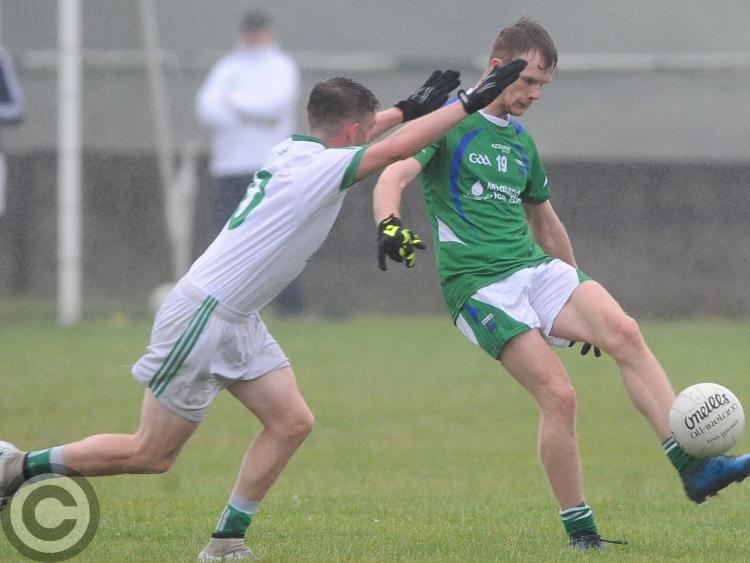 Kevin Sorohan on the ball for Rathcline in evading the challenge of Killashee opponent Mark Rossiter. Action from the IFC first round game at Allen Park back in July. Photo: Declan Gilmore

The decision to introduce quarter-finals in this year’s Intermediate Football Championship certainly increased the interest in the current battle for the Gerry Hennessy Cup and the outcome of the two groups went right down to the wire in the final round of fixtures.

The most notable casualty were the 2017 beaten finalists Sean Connolly’s, who are now facing a relegation fight against Kenagh, while the unluckiest team in the championship were Young Grattans who lost out on the head-to-head regulation after finishing level on points with Killashee.

Six teams remain in the hunt for the Hennessy Cup and the two quarter-finals are down for decision in a double bill at Allen Park, Newtownforbes this Sunday evening.

The first game on the programme is the clash of Ardagh St Patrick’s/Moydow Harpers v  Killashee (throw-in 5pm) and on the evidence of their impressive 0-15 to 0-8 win over Connolly’s in the previous round the amalgamation are fancied to advance a stage further.

Providing the biggest the threat to St Brigid’s will be Killian Farrell and Daryl Carrigy, the dangermen in the Ardagh/Moydow full-forward-line, while the key figures on the Killashee team are Killian Lee, Michael Farrell and Johnny Casey.

Rathcline manager Liam Tully (from the Kilbride club in Co Roscommon) and his fellow mentors opted to field an understrength team in the remaining group fixture against Ballymore as they were already qualified.

County players Liam Connerton (injured), Shane Donohue and Shane Kenny did not start in that surprise defeat, blocking the Lanesboro side a direct route to the last four, but the influential trio will be back on the team when they take on neighbouring rivals Cashel in the second quarter-final (6.30pm).

The general opinion is that Rathcline should win but Cashel will be really fired up in their quest to remain in contention for the title with the Farrell brothers Andrew and Conor Farrell, along with Gavin Kelly, their main men.

Waiting in the wings are the group winners Ballymore and Fr Manning Gaels, who will be kept apart in the draw for the Longford IFC semi-finals which will be made after the games at Allen Park on Sunday evening.