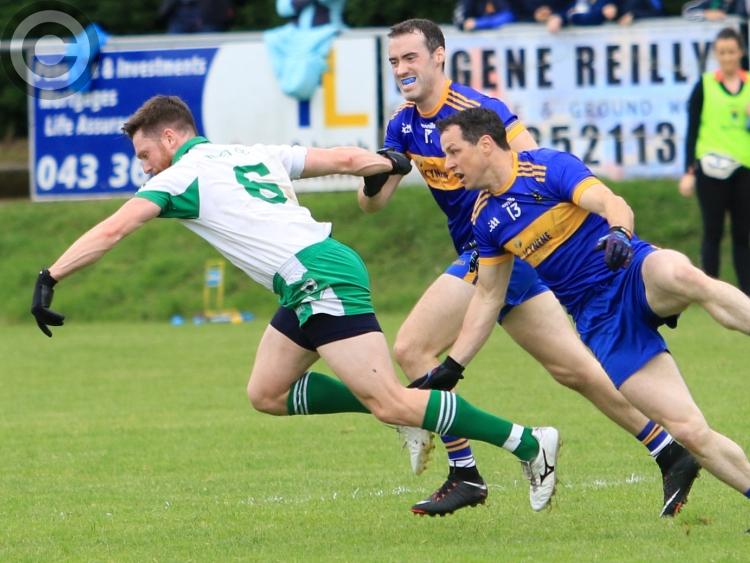 A fine first half performance paved the way for Dromard’s eventual victory over Killoe as Sean Hagan’s side made it through to the Senior Football Championship quarter-finals with Cian Mimnagh landing a terrific winning point in stoppage time.

Francis McGee, capitalising on a mistake in the Emmet Og defence, planted the ball in the roof of the net for the decisive only goal with five minutes gone in the Group 3 game at the Colmcille GAA grounds, McGee Park, on Sunday last.

Dromard ended up leading by 1-7 to 0-8 at the break and while they only managed to register three more points in the second half it was enough to keep them in contention for the Connolly Cup.

Already qualified Killoe were the better team on the changeover but suffered a severe setback when Paddy Kiernan was sent-off in the 43rd minute after receiving a couple of yellow cards in quick succession.

A strong start to the second half yielded a brace of points from Sean McCormack (one free) and Daniel Mimnagh and Mark Hughes were also on target as Emmet Og hit the front by the 39th minute.

Joseph Hagan (free) replied for Dromard who looked to be in trouble when they trailed by 0-12 to 1-8 but Killoe failed to register another score during the remainder of this interesting match.

Kicking four wides in a row certainly did not help the Emmet Og cause and with the advantage of the extra man Dromard battled back to level matters with a point from a free converted by Francis McGee free in the 54th minute.

And just when it appeared that the game was going to end in a draw up popped second half substitute Cian Mimnagh to fire over a glorious score to clinch the narrow win for Dromard.

It would probably have been a different story but for a great save by the Dromard keeper Sean McNerney to keep out a goalbound shot from Mark Hughes in the opening minute of the game.

While Daniel Mimnagh kicked over the resulting ‘45’ back came Dromard with a cracking point from Diarmuid Masterson, operating at centre-half-back, and moments later the alert Francis McGee pounced to score the vital goal.

Further points followed from Ronan McEntire and McGee (free) as Dromard led by 1-3 to 0-1 with only nine minutes played and the gap was still five points by the 23rd minute with McGee (free), Peter Reynolds (a terrific strike from a tight angle) and Joseph Hagan (a fine effort) adding to the tally.

Killoe were 1-7 to 0-5 behind at this stage, with their other scores coming from Denis McGoldrick (2) and Sean McCormack (2 frees), but a strong finish to the first half produced three more points through defender Padraig McCormack (a great score), McCormack (free) and McGoldrick - the latter hitting a third point from play.

The second half was a cagey affair as Dromard defended their slender lead, knowing exactly what they had to do to qualify, and it worked out well for them in the end.