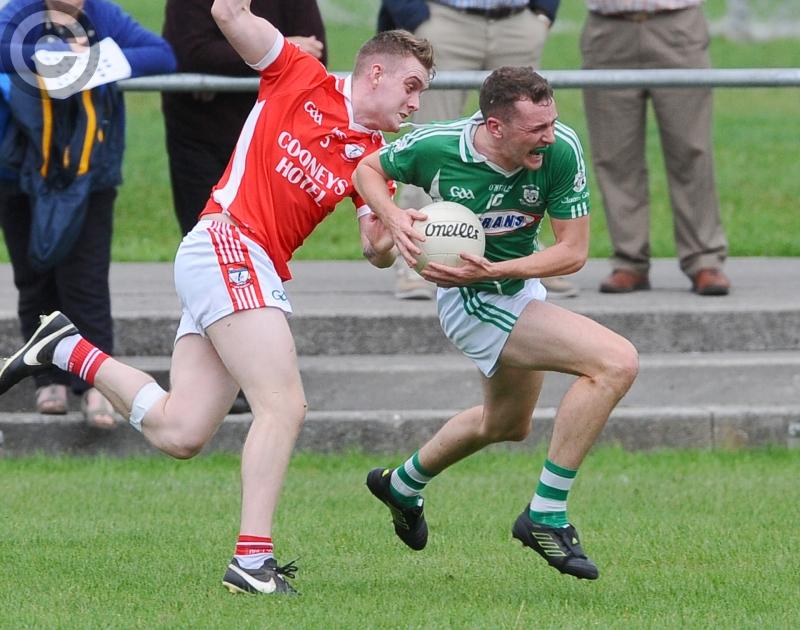 Conor Shields on the ball for Clonguish in this tussle with Ballymahon opponent Sean McMullen. Action from the SFC Group 1 game at McGann Park, Kenagh. Photo: Declan Gilmore

Clonguish experienced little difficulty in making sure of their place in the Senior Football Championship quarter-finals when they cruised to a very easy win over prime relegation candidates Ballymahon in the Group 1 clash at McGann Park, Kenagh on Saturday evening.

Ballymahon trailed by 1-9 to 1-3 at the break with the Clonguish goal materialising in the 30th minute when Joe O’Brien flicked the ball to the net from close range.

The south Longford side launched an immediate counter-attack when Kyle Fitzmaurice weaved his way through to score a well-taken goal but things went from bad to worse for them in the second half.

Ballymahon were reduced to 14 players with six minutes gone on the changeover when John Nevin was sent-off after receiving a second yellow card and they ended up losing by the wide margin of 13 points.