Longford SFC: Dromard need a result against Killoe to reach the last eight 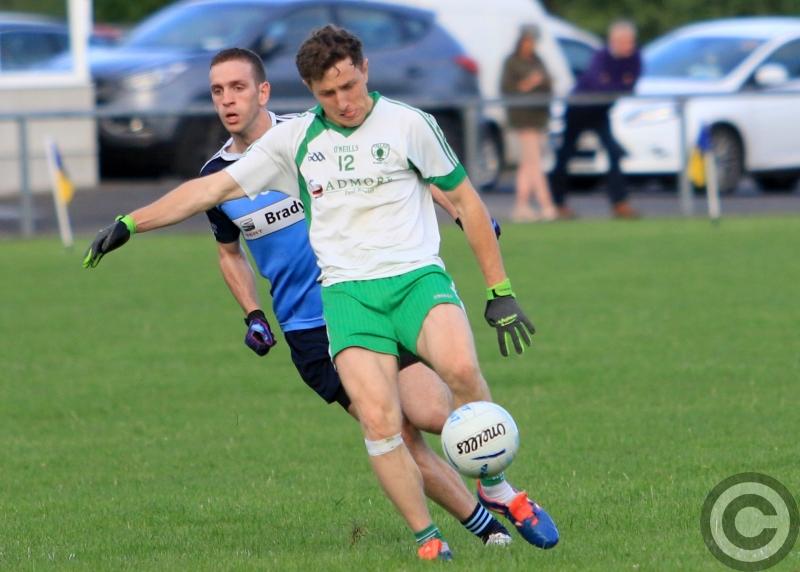 Daniel Mimnagh pictured in action for Killoe against Slashers opponent Andrew Dalton in the previous round of the SFC Group 3 clash at the Dromard grounds. Photo: Syl Healy

The final round of fixtures in the group stage of the 2018 senior football championship are down for decision this weekend and the stand out match is clearly the clash of Dromard and Killoe.

McGee Park in Aughnacliffe is the venue for the Group 3 showdown on Sunday (throw-in 1.30pm) and while Emmet Og are already qualified for the quarter-finals by virtue of their win over Longford Slashers, a draw will be good enough to get Dromard through to the last eight.

Should Sean Hagan’s side lose then scores difference will decide whether they or Slashers survive in the championship so it is a very intriguing situation.

With Abbeylara and Clonguish almost certainly qualified from Group 1, the remaining quarter-final slot is between Mostrim and Ballymahon and it could come down to scores difference to determine who makes further progress.

Group 2 is already decided with the reigning champions Mullinalaghta St Columba’s joined in the quarter-finals by Colmcille and St Mary’s Granard with Carrickedmond facing the relegation play-offs.

Therefore, there is nothing but pride at stake in the remaining games in Group 2 and following the clash of Colmcille and Granard at Lynch Park, Abbeylara on Sunday evening (7pm) the open draw for the quarter-finals will be made.