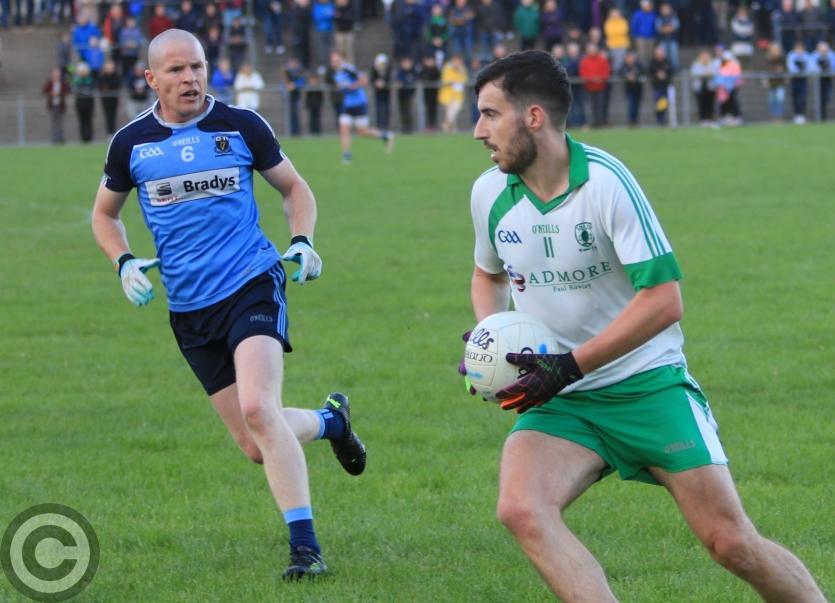 Mark Hughes on the attack for Killoe in breaking away from Slashers defender Dermot Brady. Action from the SFC Group 3 clash at the Dromard grounds on Saturday evening. Photo: Syl Healy

Killoe proved too strong for Longford Slashers in the Senior Football Championship Group 3 clash at the Dromard grounds on Saturday evening.

This result puts Emmet Og through to the quarter-finals, regardless of what happens in their remaining fixture against Dromard, and they had established a commanding 0-15 to 0-7 lead by the time Mark Hughes shot over the bar for his fifth point in the 48th minute.

At this stage of the game Killoe were reduced to 14 players when the already booked Paddy Kiernan was sent-off for a black card offence. This allowed Slashers some leeway as they closed the gap with a point apiece from Paddy Duggan and substitute Niall Mulligan while Barry Gilleran slotted over a couple of consolation frees in stoppage time.

Four points separated the sides in the finish and Slashers are now depending on Emmet Og beating Dromard by a bigger margin if they are to make it through to the last eight.

Without injured duo Sean McCormack and Larry Moran, Killoe led by 0-8 to 0-5 at the break.