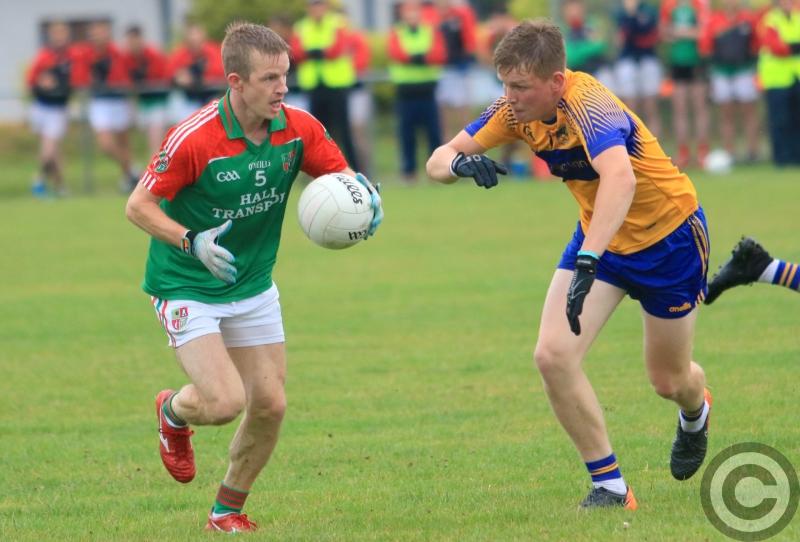 Declan Reilly on the ball for Colmcille with Carrickedmond opponent Sean Kelly closing in to challenge. Action from the SFC Group 2 game at Keenan Park on Friday evening. Photo: Syl Healy

Colmcille bounced back from the heavy defeat against Mullinalaghta in the opening round to score a comprehensive win over Carrickedmond in the Senior Football Championship Group 2 clash at Keenan Park, Ardagh on Friday evening.

Back in action after recovering from injury, the influential Barry McKeon fired over a total of six points and Cathal McCabe also impressed to score a couple of goals as Colmcille gradually asserted their superiority in a very one-sided second half.

Carrickedmond looked to have a good chance of springing a surprise when they raced into a 1-4 to 0-1 lead with nine minutes gone in the game after Kyle Kenny scored a well-taken goal but Colmcille hit back immediately when Ruairi Harkin stuck the ball in the back of the net.

The Carrick advantage was cut to just the minimum of margins at the break, 1-7 to 1-6, and from the moment Cathal McCabe weaved his way through to score a cracking goal in the 37th minute to put Colmcille in front for the first time the outcome was never in any doubt.

Further goals followed from Alan McKeon and McCabe as Colmcille outscored Carrickedmond 3-7 to 0-4 in the second half.