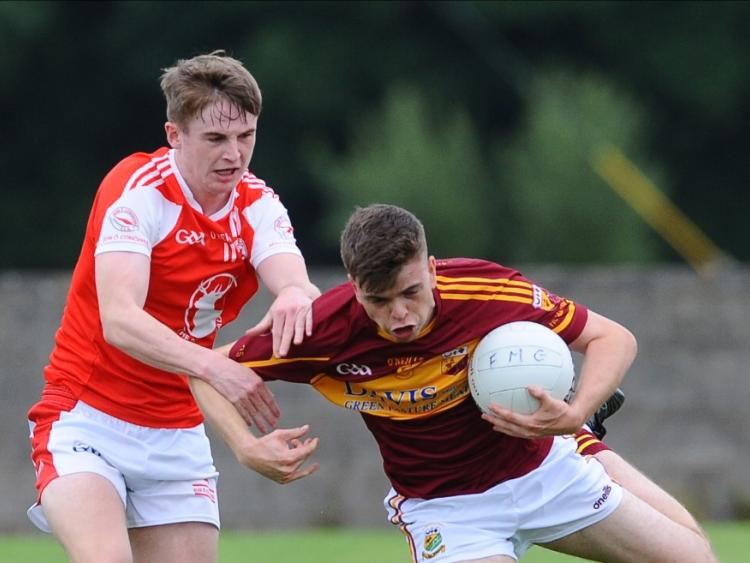 A wonderful point from Pauric Gill minutes from the end saw Fr Manning Gaels score a narrow win in their opening Intermediate Football Championship game but they were made work hard by Sean Connolly’s in the Group 2 clash at Allen Park, Newtownforbes on Sunday evening last.

Gill picked up the ball and hit a terrific shot in the 57th minute that curled over the bar for the best score of the game. Dessie Reynolds did have a chance to level matters for Connolly’s but his effort just went wide.

Gill was immense throughout for Fr Manning Gaels Gaels but had to endure a few very tough challenges and despite the close attention he never retaliated once.

The Gaels looked to be in control of this game but credit to Connolly’s who fought back with a goal from Paddy McDonnell in the 46th minute to leave the sides all square.

Pauric Gill was fouled in the second minute which led to the Gaels opening point; a free from Ryan Crowe. The excellent Dessie Reynolds then kicked over two great points to give Connolly’s the lead by the 10th minute.

The Gaels then took control of the game with the impressive Diarmuid Cooney very much to the fore. He kicked over three fine points with Dean Cosgrove and David Collum also on target as the Drumlish/Ballinamuck side opened up a four point lead by the 22nd minute.

A pointed free from Dessie Reynolds and a fine Stephen Lynch score cut the gap with Connolly’s going in at the break 0-6 to 0-4 behind.

The Gaels restored their four point advantage in the opening minutes of the second half with points from Ryan Crowe (free) and Diarmuid Cooney but Dessie Reynolds kept Connolly’s in the game when he converted two frees in the space of a few minutes.

Eoin Keane kicked over a fabulous effort in the 40th minute to put the Gaels ahead by three but minutes later Connolly’s were on level terms when substitute Paddy McDonnell palmed the ball to the net.

Dessie Reynolds was through in the 54th minute, only to blast his effort wide, but he made amends for that miss two minutes later when he got the equalising score.

Both sides had chances in the final minutes with Pauric Gill showing his class with the cracking point he landed to give the Gaels the lead again and that proved to be the winning score.