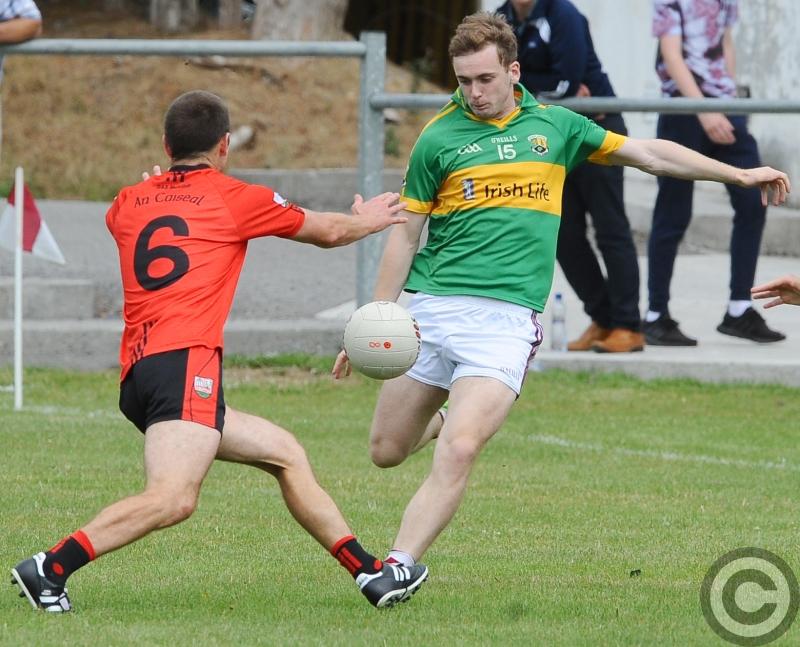 Daryl Carrigy pictured in action for Ardagh/Moydow in facing the challenge of Cashel opponent Padraig Farrell in the IFC Group 2 game in Kenagh on Sunday last. Photo: Declan Gilmore

A well struck point from Ronan Farrell in stoppage time earned Cashel a draw against Ardagh/Moydow in the Intermediate Football Championship Group 2 opening round game at McGann Park, Kenagh on Sunday last.

After kicking three wides in a row Cashel had a chance to draw level in the second minute of stoppage time and Farrell made no mistake with his effort.

It was a game that both sides could have won. Cashel made a great start while Ardagh/Moydow when they got going played some good football. Corner-backs Thomas Powell and John Keegan were excellent for Ardagh/Moydow and Gavin Kelly and Ronan Farrell had fine games for Cashel.

Ardagh/Moydow had the first chance of the game with Daryl Carrigy and Shane Henry linking up but they failed to find the target. Cashel opened the scoring in the third minute after Andrew Farrell was fouled and Gavin Kelly kicked over the free.

A Kevin Farrell score and a fantastic Conor Flood point put three between the sides by the sixth minute and two minutes later Farrell got his second score to put Cashel ahead by four.

In the 18th minute a Shane Henry goal attempt was superbly saved by Cashel keeper Shane Bannon. It wasn’t until the 22nd minute that Ardagh/Moydow finally got their first point on the board; a pointed free from Henry.

Gerard Farrell was fouled in the first minute of stoppage time with Henry kicking over the free. A lovely point from Jamie Bermingham one minute later saw Cashel lead at the break by 0-5 to 0-2.

Cashel had a goal chance in the opening minute of the second half but John Keegan made an excellent interception. The game then turned in Ardagh/Moydow’s favour.

Shane Henry kicked over a lovely point in the 35th minute and he followed that up with an even better point from play before Daryl Carrigy got his first point of the game in the 37th minute as Ardagh/Moydow drew level.

Cashel replied in the 39th minute when Conor Farrell kicked over a free. Emmet Donlon and Carrigy then registered a point apiece for Ardagh/Moydow as they took the lead for the first time in the 45th minute.

It was a real ding-dong battle in the final 15 minutes. Another free from Gavin Kelly drew Cashel level in the 47th minute. A neat Emmet Donlon point put Ardagh/Moydow back in front in the 49th minute but Kelly was on target again for Cashel two minutes later, firing over a great point from play to level matters.

In the 57th minute another Shane Henry free edged Ardagh/Moydow ahead and Cashel then had chances to get scores but kicked three wides in a row.

In stoppage time Ronan Farrell surged forward and steadied himself before hitting the ball over the bar to earn Cashel a draw.