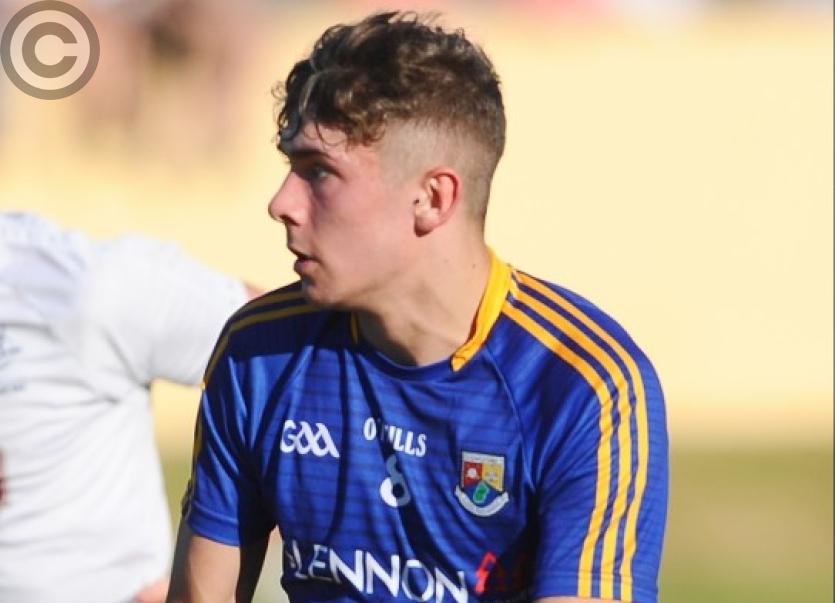 Jonathan Borland (Killoe), who will line-out with the Longford U-17s against Dublin in the Leinster minor shield final. Photo: Declan Gilmore

Kenagh’s Keelan McGann scored a last gasp winning point for the Longford U-17s against Louth in the Leinster Minor Football Shield semi-final at the Ardee grounds on Saturday last and now meet Dublin in the title decider at Pearse Park this Saturday, throw-in 12.30pm.

In the special competition confined to the counties who failed to qualify for the semi-finals of the Leinster Minor Championship proper, Longford showed fierce resilience in battling back from eight points down (2-2 to 0-0) with 12 minutes gone in the first half to eventually come out on top by the minimum of margins in the end.

After getting off to such a bad start with the concession of the early goals scored by Conall McCaul and Cathal Fleming,  it was not looking good for Ger Carberry’s side but they gradually recovered to cut the gap to five points (2-5 to 0-6) at the break.

Keelan McGann, Cian Dooner (2), Eoghan McCormack, Euan Finneran and Reece Reilly accounted for the Longford scores in the first half and a great start to the second half brought the midlanders right back into contention.

A goal from McCormack, along with other scores from McGann and Dooner, left Longford on level terms with 40 minutes gone on the clock and the momentum was now firmly with the visitors who led by 1-15 to 3-7 by the 55th minute thanks to a couple of more points from McGann.

Louth scored a fourth goal in a dramatic finish to leave the sides all square and with a draw and extra-time looking the likely outcome up popped McGann to land the winning point with the last kick of the game.

Particularly impressive for the winners were Keelan McGann and Carrickedmond’s Eoghan McCormack who clocked up a total of 1-10 between them but it was a great team effort overall.

The Longford U-17s have now earned a crack at Dublin in the Leinster Minor Shield final on Saturday with home advantage in the hope of springing a surprise.

The Dubs, fielding some fringe members of their strong squad, cruised to a very easy 3-20 to 0-12 win over Wexford in the other semi-final on Saturday last.