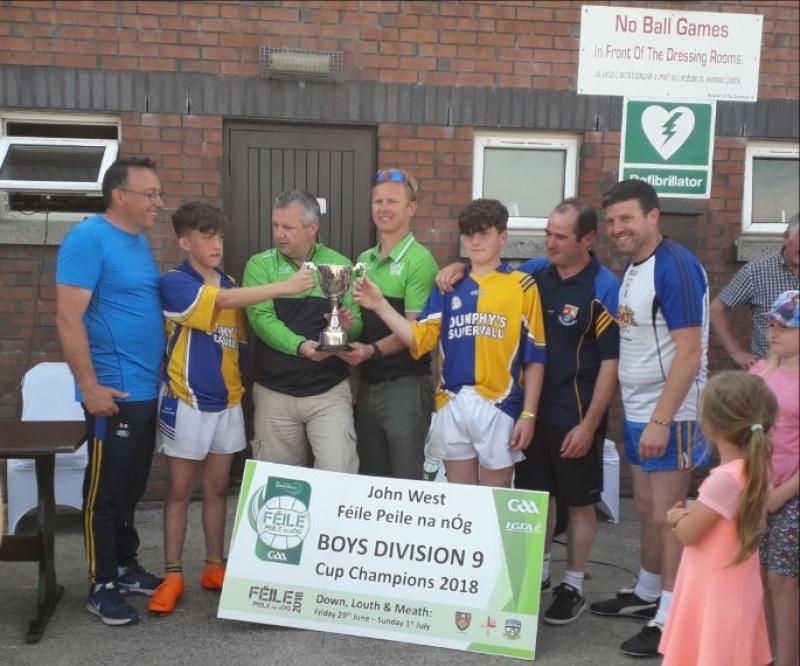 Padraig Boyle and Jamie Brady, the joint captains of the Granard/Ballymore U-14 football team, receiving the Division 9 Cup following their great win over Curry (Sligo) in the National Feile Final.

History was made on Sunday last when Granard/Ballymore U-14s won a Feile na nGael title for the first time ever. The Granard side defeated Sligo opponents Curry in the final to claim the Division 9 Cup.

Back in 1994 St. Mary’s won Feile but this was the first time the amalgamation got to the finals. They were based with the Ardglass club in Co. Down and as well as the large number of supporters that travelled from Granard to support the team, their hosts Ardglass came along to support them on Sunday in their semi-final and then final.

In their first group game Granard/Ballymore took on Down side St. John’s. They started off well and were 2-3 to 0-2 up at the break. They built on their fine first half performance to win the game 4-7 to 2-2.

Curry were up next in their second group game. In a tight first half the Sligo side led a by two at the break and ran out comfortable winners in the end.

On Saturday Granard/Ballymore were ruthless when they defeated their host club Ardglass 8-6 to 1-3 to set up a quarter-final clash with Leitrim side Fenagh.

Granard/Ballymore were in command right from the start as they booked their place in Sunday’s semi-final with a 1-10 to 1-2 win.

The toughest test for Granard/Ballymore came on Sunday when they faced Waterford side De La Salle. They were ahead by two at the break but the game then changed very much in De La Salle’s favour. Trailing by five points with six minutes to go the Granard side showed true grit and determination with Jamie Brady’s goal bringing the game to extra-time. They booked their place in the final with a 3-6 to 4-2 win.

In a tight final against Curry there was very little between the sides with just one between them in the end; 0-4 to 0-3.

Killoe Og U-14 football squad reached the Division 4 semi-final at the National Feile last weekend. Killoe emerged victorious in a few games before they suffered a narrow 1-2 to 0-3 defeat against the eventual title winners North London in the semi-final.

St Brigid's Gaels Ardagh U-14 ladies football squad reached the Division 4 Girls Final at the National Feile last weekend. The Ardagh side won a number of games before eventually losing out to Derry opponents O'Donovan Rossa, Magherafelt by 1-7 to 0-2 in the title decider.