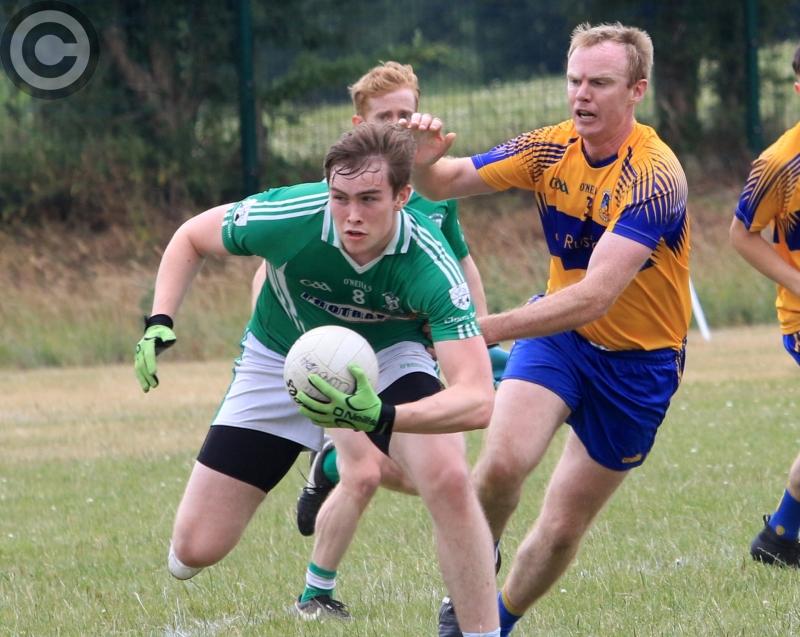 Peter Hanley on the ball for Clonguish in evading the challenge of Carrickedmond opponent Kevin Moran. Action from the Bertie Allen Cup Final at McGann Park, Kenagh. Photo: Syl Healy

A goal from Joe O’Brien in the early stages of the second half proved to be the decisive score as Clonguish won the Bertie Allen Cup with just a single point to spare over Carrickedmond in the Reserve Football League 1 Final at McGann Park, Kenagh on Sunday.

O’Brien finished the ball to the net in the 35th minute and the sharpshooter ended up with 1-5 to his credit.

Clonguish keeper Declan McKenna also played his part in this triumph by producing two great saves near the end. In the 59th minute he denied Conor Kelly with a fine save and in stoppage time he tipped Jonathan Keegan’s effort over the bar for a point.

The league title winners had to play the final 14 minutes plus with 14 men after Ronan Duffy was sent-off. Carrickedmond tried to make use of the numerical advantage but Clonguish held firm and were able to stick it out for the win.