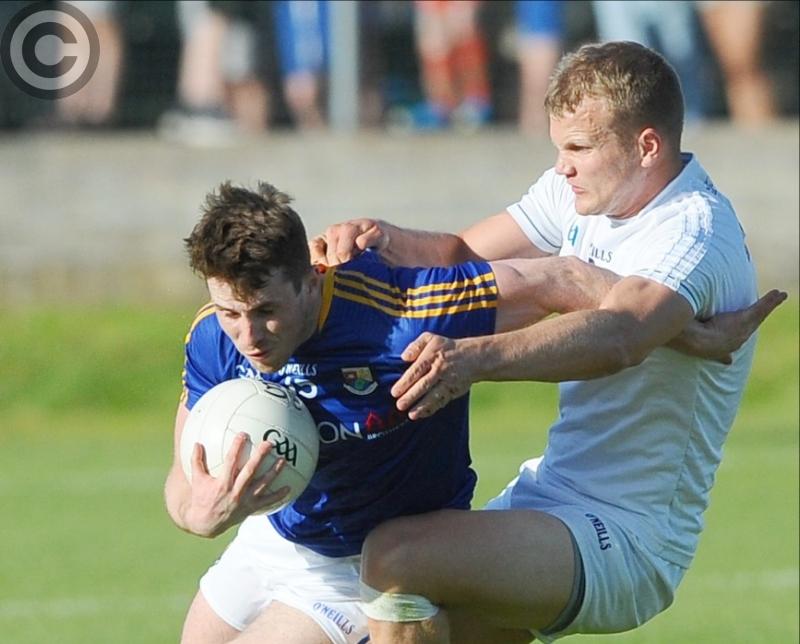 As the disappointed home supporters reflect on another near miss in a most encouraging campaign this season that augurs well for the future, it could have been a different story for the gallant losers who were so unlucky not to score a couple of goals in the first half when shots from Liam Connerton (22nd minute) and Donal McElligott (31st minute) struck the crossbar.

So Longford had to be content with a slender 0-9 to 0-8 lead at the break when they should have been further in front but they stuck with a fancied Kildare side right up until the bitter end in a pulsating game.

An attendance in the region of 6,000 witnessed a ding-dong battle played in perfect conditions on a glorious sunny evening and the underdogs Longford were never headed until the 69th minute when Kildare centre-half-back Eoin Doyle surged forward to fist the ball over the bar.

Making good use of their substitutes who were sprung from a stronger bench, Kildare had finally taken the lead in the tension packed closing stages and Longford then wasted a great chance of the equaliser in stoppage time as a David McGivney free dropped short into the arms of the opposing keeper Mark Donnellan.

The lengthy additional time stretched out for a total of nine agonising minutes and Kildare extended their advantage with a cracking point from their last replacement Kevin Feely.

Then a  brilliant move yielded a goal from another substitute Chris Healy who was left with the simple task of flicking the ball into the empty net, coming  just after Longford tried to engineer a goal chance but it was wasted.

That killer blow was struck in the sixth minute of stoppage time and there was more drama  as Kildare were reduced to 14 players when defender Peter Kelly was sent-off after receiving a second yellow card.

There was still time for Robbie Smyth to fire home a well-taken goal in the eighth minute of stoppage time to give Longford a glimmer of hope but Kildare made sure of their place in Round 3 of the All-Ireland Qualifiers with a point from Paul Cribben.

Forced to field without the suspended James McGivney, along with injured duo Rian Brady and Ronan McEntire, Longford suffered another setback when the terrific Padraig McCormack was dismissed for a harsh black card with 53 minutes gone on the clock and it was just not meant to be for Denis Connerton’s bravehearts on their exit from the All-Ireland Championship.

Also ruled out was reserve goalkeeper Pat Farrell following an accidental clash with Rian Brady at a training session earlier in the week but even that most unfortunate mishap failed to stop a totally committed Longford team producing a great performance in doing the county proud.

Under the guidance of vastly experienced manager Denis Connerton, the promising progress continues with Longford now well able to compete with most of the counties and the first target next season will be promotion to Division 2 of the National League.

Inspired by the outstanding  captain Donal McElligott who was a real driving force at centre-half-back, a number of other players stood out in what was a courageous team effort and there was a lot to admire about the extremely energetic display as Longford gave it their best shot in the bid to spring a surprise.

Kildare, who were operating in Division 1 of the National League this season, were very relieved to escape from Pearse Park with a win and their greater physical strength proved to be a decisive factor in the finish.

With a lot of pushing and shoving even before the ball was thrown in, there was a high intensity in this most entertaining Round 2 qualifier with both sides guilty of shooting a number of wides.

Longford got off to a great start with a couple of points from Robbie Smyth (free and play) and Smyth went so close to scoring a goal in the 22nd minute when his close range shot was blocked down by Kildare full-back David Hyland.

Liam Connerton (Longford's most dangerous forward who was always a threat) pounced on the breaking ball to rattle the crossbar with his attempt to find the back of the net and there was another very lucky let-off for Kildare in the 31st minute when a cracking strike from Donal McElligott clipped the woodwork on the way over the bar.

The other six Longford points in the first half were registered by David McGivney (free), Sean McCormack, Connerton, Smyth (from a brilliantly struck sideline kick), Conor Berry and Darren Gallagher while four of the Kildare scores (two frees) came from accurate corner-forward Neil Flynn.

A brace from Paddy Brophy (who started instead of injured powerful midfielder Kevin Feely), Tommy Moolick and Daniel Flynn landed the other points for Kildare who were dealt a blow when attacker Niall Kelly was branded with a black card with just four minutes gone in the game.

The second half developed into a very cagey affair and entering the final quarter of this absorbing contest that unfolded in the sweltering heat Longford still led by the minimum of margins (0-13 to 0-12) with their scores coming from goalkeeper Paddy Collum (a well struck ‘45), Robbie Smyth (two frees) and the always prominent midfielder Darren Gallagher.

Gallagher kicked over a terrific point in the 56th minute but Longford were badly hit by the loss of black card victim Padraig McCormack (replaced by Barry Gilleran) and subsequently failed to register another score until the Smyth goal in the eighth minute of stoppage time.

That was a long gap of 22 minutes and in between Kildare got on top to eventually get over the the line in a frantic finish. Points from Neil Flynn (free), Paul Cribben, Tommy Moolick and full-back David Hyland had kept the lilywhites in contention and the sides were all square when Fergal Conway fired over a great score in the 62nd minute.

In a succession of short passes Longford tried to engineer the lead point but Diarmuid Masterson blazed the ball wide and Kildare then lost Conway to a black card offence in the 68th minute.

But Cian O’Neill’s side showed a lot of bottle in refusing to panic in such a tight situation and after Eoin Doyle gave them the lead for the first time in the 69th minute  a further 1-2 followed as Kildare clinched a very hard earned victory.